CLAUDIA AND THE TIN MEN 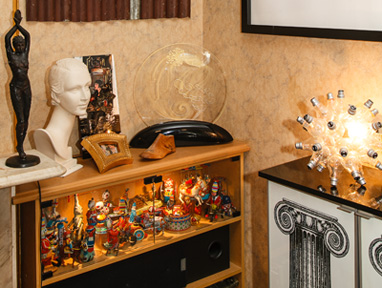 Claudia Chan Shaw has few regrets in life, but she admits she boots herself every time she recalls her decision at the age of 15 to sell off her childhood toy collection. Having decided that she was too grown up and way too cool for toys she took herself down to Balmain markets, sold the lot and “has been overcompensating ever since”.

These days, the Sydney home Claudia, marketing manager and director of her mother, Vivian Chan Shaw’s elegant knitwear label and co-host of ABC TV program, The Collectors, shares with her publicist husband Stewart White is practically bursting with the spoils of their mutual passion for collecting.

“Stewart is the nature boy,” she explains. “He’s responsible for the fossils and antiquities, Champagne caps (plaques de muselet) and souvenirs of the Third Reich. My fascinations include photography and art, film noir, cartoons and first edition books. We meet in the middle with toys and we find it difficult to shed, so we tend to have two of everything.”

Toys peer out at the visitor from every shelf, bench and cabinet. Their extraordinary collection is predominantly of tin, with a focus on robots and space toys, the most prized ones dating from the 1950s and ‘60s. “Childhood TV has a lot to answer for,” Claudia admits. “A lot of our collection reflects B-grade sci-fi. So there are pieces from Lost in Space, Astro Boy and Gumby. There are no girly things in this house. If it’s interesting, quirky, strong and amusing, it probably belongs here.”

Asked about her favourite pieces, Claudia singles out a Maltese falcon statue (more about that later), a DB 5 Aston Martin model (complete with ejector seat) from the movie Goldfinger, Zoomer the Japanese robot complete with his own spanner in case he conks out and multiple copies of a Yoshiya high-wheeled robot. 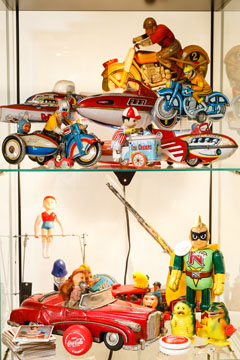 The original model, with its corroded edges and the odd dent was made in Japan. More recent acquisitions or gifts are Chinese copies and remarkably faithful ones at that.

“I’m not a purist,” she says. “I collect from the heart and if it happens to also have collector value, that’s a bonus. I have no issue with repros. They give a whole new generation of collectors the chance to get started. There are people who collect for their super, but that’s a different mindset. I collect because I love it first and foremost.” Having said that, Claudia acknowledges that even humble tin toys can fetch vast sums. “There’s a class of collector I would call high end robot stalkers,” she says. “One went for $74,000 at a recent Sotheby’s auction. I wouldn’t of course pay anything like that. I’m a loony, not an heiress.”

Claudia traces her collector’s instinct back to age 11 when her older brother Daniel introduced her to the movies, in particular those starring Humphrey Bogart. “Something just clicked in me,” she recalls. “Obviously I was a bit of an obsessive kid, because I started going to Bogie festivals. And then I would take a recorder and tape the dialogue so I could play it back over and over again when I got home. My first collectable purchase was a Bogie poster bought for $1 from Gould’s Book Arcade. It kind of took off from there.”

Asked if she is one of those Bogie fans who can recall vast tracts from Casablanca, Claudia hesitates for a second, before breaking into a recitation. “Actually I can do most of it,” she confesses. “Plus quite a lot of The Maltese Falcon.”

Which explains why as a young arts school graduate in New York to promote her mother’s fashion, she was thrilled to learn of a shop called The Detective Store, where she purchased a still treasured statue of the falcon.

Early on she scoured markets, second-hand stores and garage sales to build her collection. Then as her knowledge and expertise grew she moved on to auction houses. More recently, the internet has further reduced the collectors’ world to a global village. “At first I was very suspicious of buying online,” she says. “I used to think I had to touch and feel an object to be sure of its authenticity. But now I’ve developed relationships with online dealers I’m much more comfortable with buying that way.” 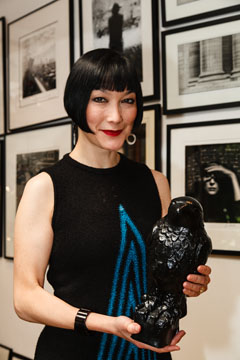 Claudia admits that being invited to become a co-host on The Collectors was a dream come true. “I’d appeared on the show as a guest and when Nicole left I was invited to audition,” she recalls. “Apart from modeling as a youngster and being in a TV show about my mother’s business, I’d never done anything like it. Or anything that actually required me to open my mouth and make sense at the same time. But it kind of came naturally. It’s amazing how kindred spirits collect and it doesn’t matter whether it’s bottle tops or navel fluff they collect you are drawn to them. In a sense being involved with The Collectors reaffirms your crazy interest and makes you feel you are not quite so nutty.”

A break in the program afforded Claudia the chance to write a book about her passion. Launched last month Collectomania: From Objects of Desire to Magnificent Obsession (HarperCollins, rrp$35) allowed her to more fully explore the world she inhabits for a hobby, tracing the history of various collectables from Bakelite and vintage fashion to Wedgwood and childhood crazes such as yoyos, snow domes and swapcards.

Ever ready to move onto the next thing, Claudia has also recently enjoyed her first solo exhibition as a photographer. Entitled Poster Boy, the exhibition is the culmination of five years work shooting disintegrating street posters from Paris, Barcelona, Melbourne and Sydney. “It’s all about layers and the passage of time,” she says. “People pull posters off and paste others over the top and each section tells a story. It’s been a fascinating journey.”

Meanwhile, she acknowledges the important role Stewart has played in encouraging her various endeavours and passions. “We actually had identical educations. We both went to Sydney College of the Arts. I went into fashion and he went into PR and our coming together was like fitting two pieces of a jigsaw together. Stewart is incredibly handy and constantly amazes me by building display cabinets for our toys. He’s also an amazing cook.”

The couple devote considerable energy to the challenge of finding the perfect gifts for each other. She found a 1954 Jacques Tati Jour de Fête poster for a significant birthday … he found a limited edition Jean Paul Gaultier corseted bottle of Piper Heidseck for another occasion. There remains just one outstanding item that would be Claudia’s holy grail. “One of the toys I sold from that original collection was a jumping Jeep clown car,” Claudia recalls. “No point crying over split milk, but I would probably part with a lot to have that restored to my collection.”