Fit for a Queenie

There is much to love about the Tweed Valley town of Murwillumbah. It sits pretty on the verdant banks of the Tweed River in far northern New South Wales — just big enough to entice weekenders for a wander through its streets, and just small enough to be the kind of town where everyone knows, or knows of, everyone else. Rolling hills and rustling fields of sugarcane surround its quaint commercial hub, home to some of the country’s most lovely art deco buildings. The town was a thriving agricultural centre when fire ripped through it in 1907, and what rose from the ashes at the hands of resilient locals is a time capsule of Australia’s offering to the deco period that captivated the architecture world in the early 1900s. 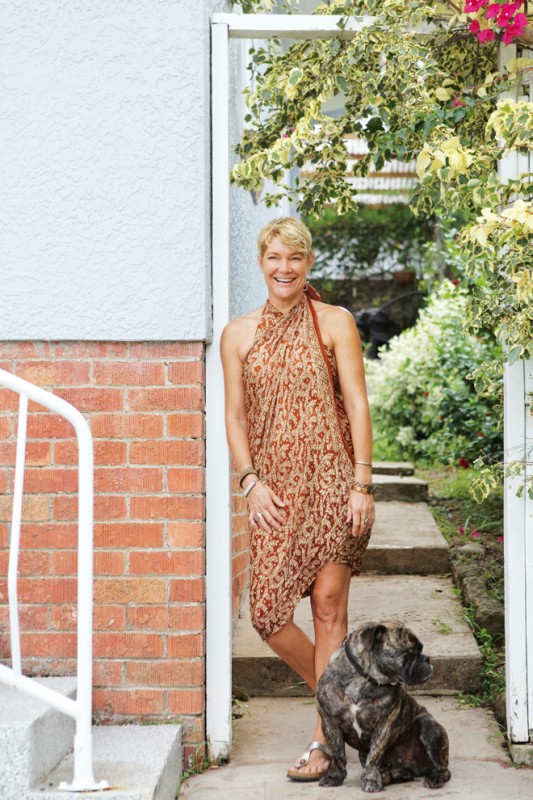 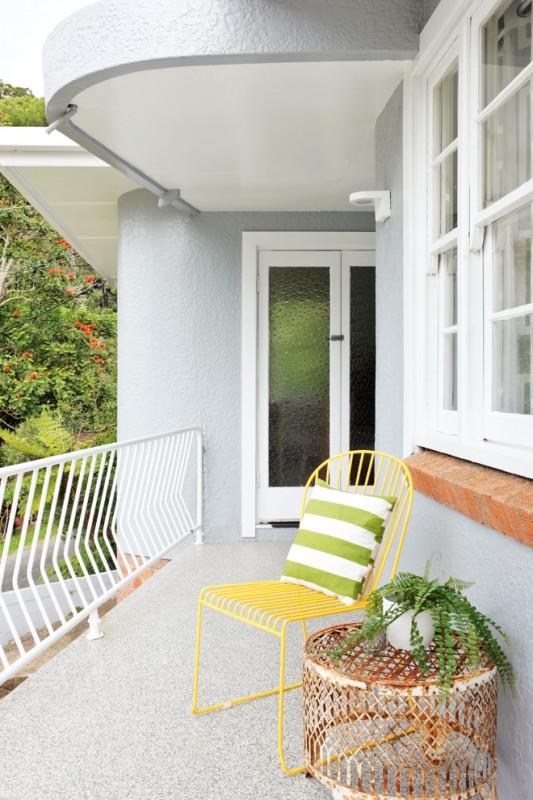 On a street winding up beyond the town is serial renovator Jane Rennie-Hynes’ pride and joy, Queenie. “I love her shape,” Jane says. “Queenie has curves. She sits up on the hill with beautiful views across the Tweed River and Murwillumbah township.” Her lofty locale and outlook give credence to the name Jane gave the old home when she bought it from the original owners in 2014. But Queenie was stuck in a lost decade with shag carpets, yellowing wallpaper and old double-hung windows that had been sealed shut with thick layers of paint courtesy of years of sprucing. 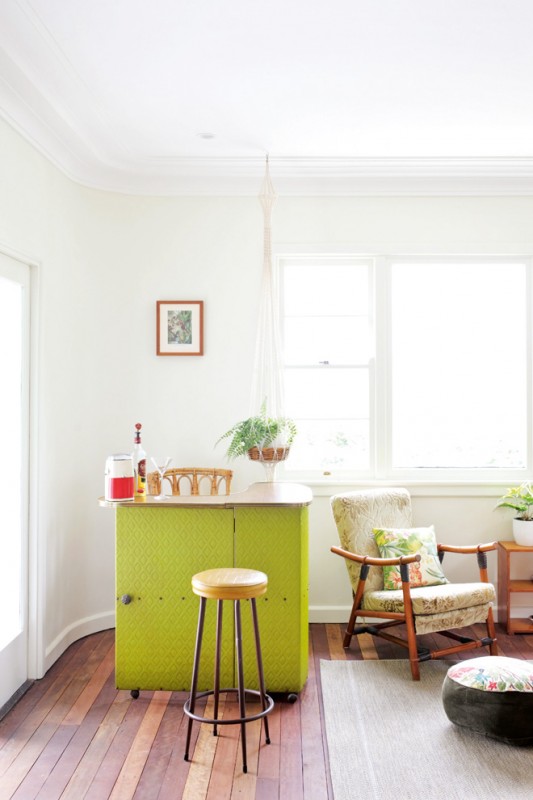 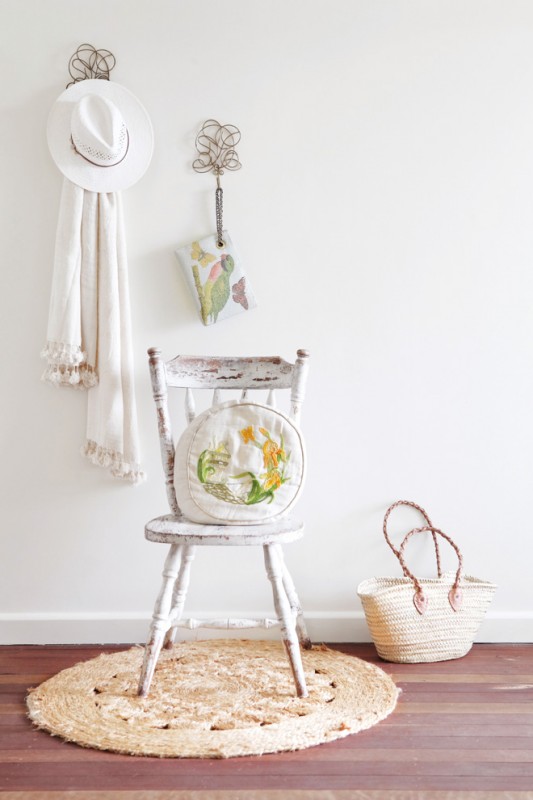 “She was well cared for, but dated,” Jane says. “She needed updating but I wanted to create a home that took you back to holidays as a kid. She needed to be opened up to let in the light and to be filled with character furniture and colour.” Jane was keen to embrace all the original standouts, instead of gutting the home and starting over. “I absolutely adore the art deco detailing,” she says. “It’s just stunning and reminds you of an era when people really took pride in how they finished their homes. That’s her history, that’s her story. I wanted to update the house and bring her into the current times and make her functional and loved, but for me, making her modern would destroy all that makes her feel like home.” 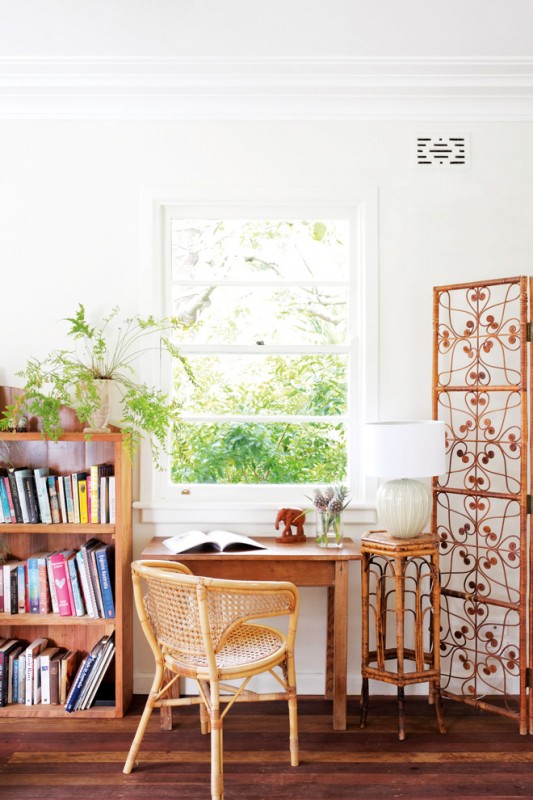 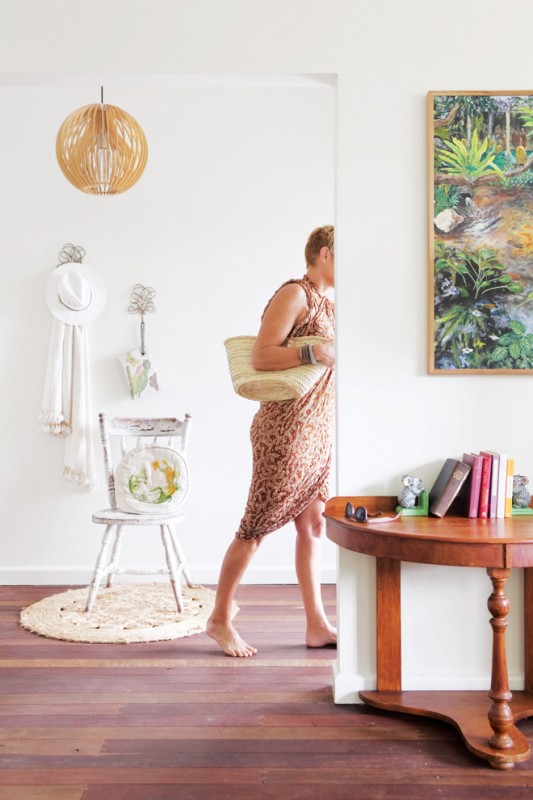 Jane is no shrinking violet in the renovation stakes. Her steel-toed boots aren’t for show, and she drives a pickup truck for reason (her résumé includes the sublime Black Shack that featured as the cover story in Australian Country 20.5). So, with a clear vision, and some help from trusty tradies, friends and family, the transformation from ugly duckling to Queenie began. “We smashed up all the tiles on the front deck and replaced them with a commercial finish which complemented the era of the house,” Jane recalls. 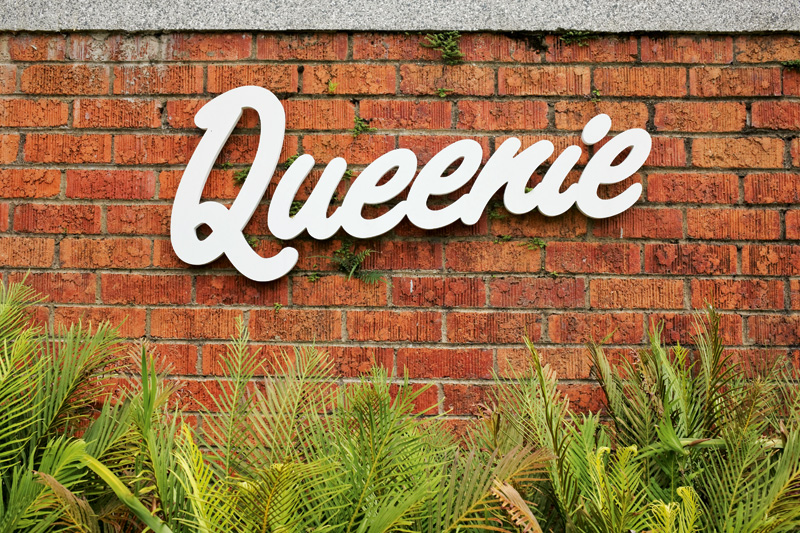 ‘‘Inside, there was lots of stripping back. My brother and his mate came and ripped out the wall between the living area and kitchen, which opened up the fabulous view, so you could really appreciate it. The whole house was painted inside and out. We stripped all the old shag carpet from the bedrooms and living area and got the floors sanded throughout, and I applied a tung oil and eucalyptus turps finish. I added bi-folding doors at the rear and reconfigured the enormous old laundry into a powder room and more compact laundry.” 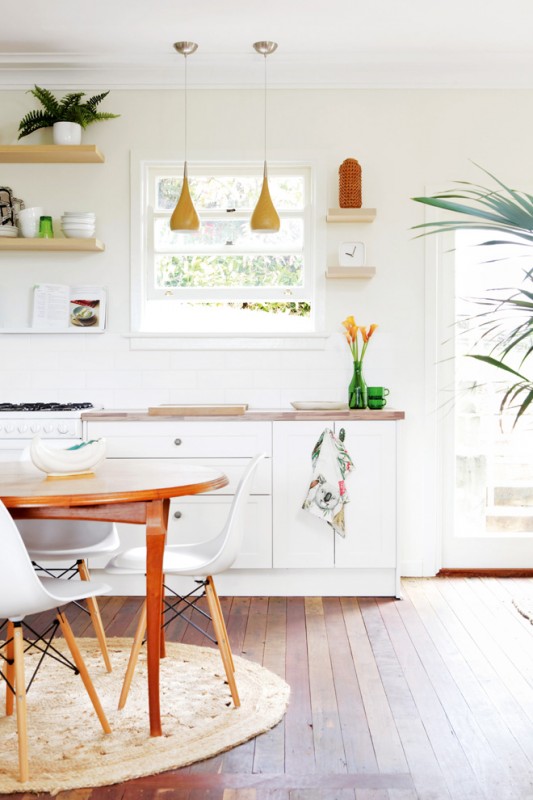 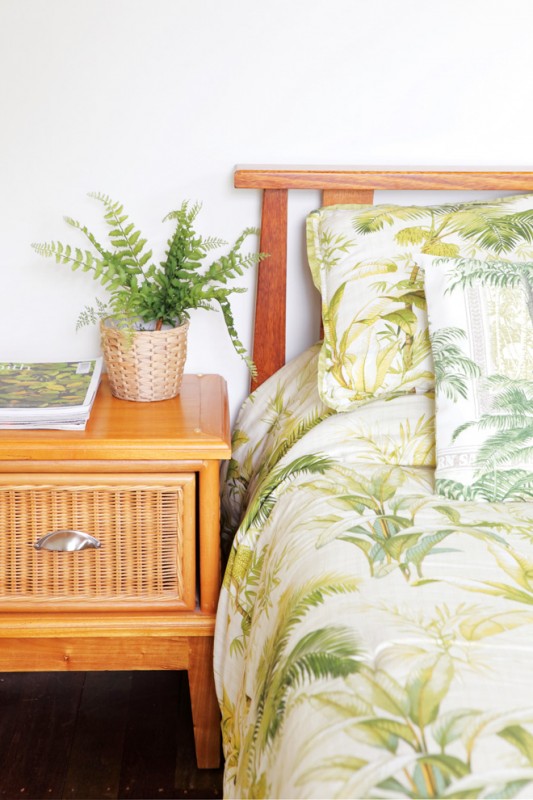 Along the way, she discovered some old gems that were saved from the skip bin and cleverly repurposed. “There was an old gas heater in the living room that had been covered by copper housing as it was no longer in use,” she says. “When I pulled that off, there were the surrounds of what must have been some kind of old heater with beautiful green art deco tiling. So, I pulled those off and scrubbed them down and used them as the feature tile in the bathroom.”

Next, she began fitting Queenie out with vintage finds and sympathetic interior touches, driving hundreds of kilometres to source the perfect pieces. “I love a drive picking up finds and exploring other places on the way,’’ Jane says. ‘‘It’s exciting not knowing what else they might have when you arrive — if you’re very lucky.” 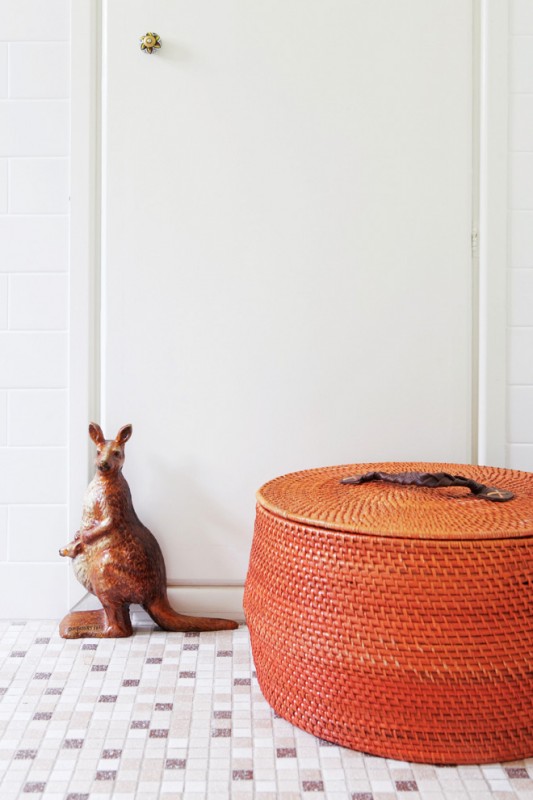 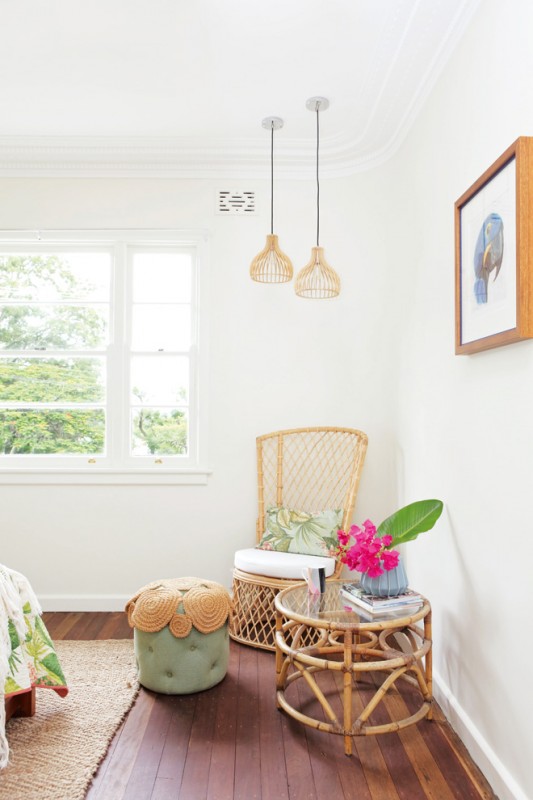 The result of all her hard labour is a light-drenched homage to the days of pretzel chairs and afternoon spritzers, a time so well captured by the iconic American photographer, Slim Aarons. A book of his works fittingly sits open on a ’70s-style coffee table in the living room. “Sitting on the front deck and enjoying a drink in the afternoon is simply the best,” Jane says. “The house itself is just a happy place.” She was recently visited by the family of its long-time owner, Ronnie, who was the local Murwillumbah butcher in days gone by. “I was fortunate enough to have Ronnie’s son and daughter see the house and was relieved to know they loved it and appreciated the character that was still left there after the renovation,” she says. “That was the best feedback. And I met a man down the road who told me his wife was born in the house which is kind of cool.” 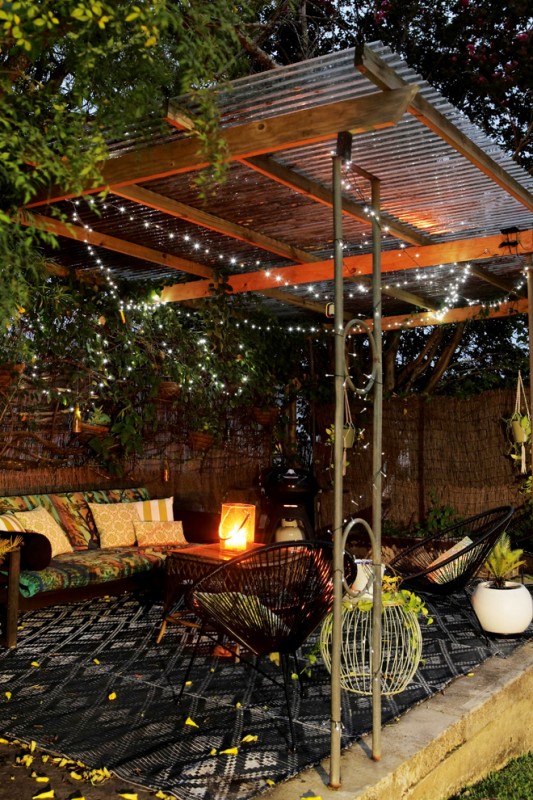 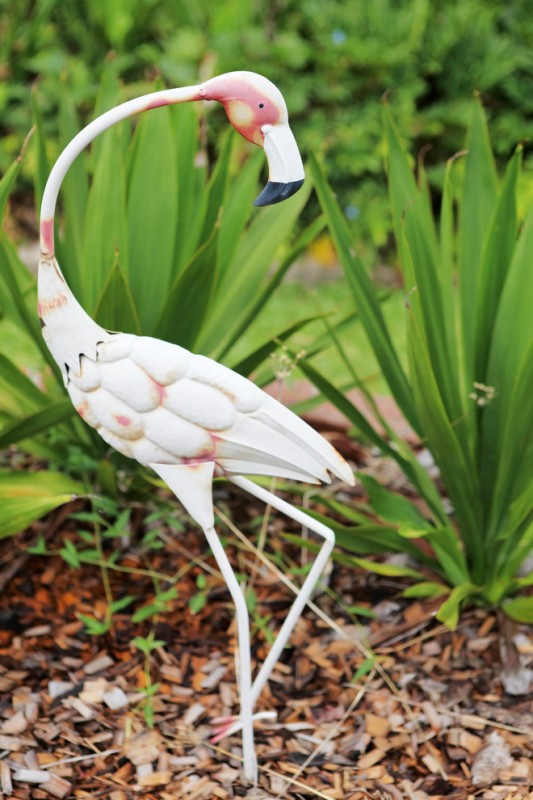 These days, Jane rents Queenie on Airbnb and often has friends and family stay. “They love her, I’m never allowed to sell her,” she says with a laugh. “She’s like this groovy aunty who you want to keep around, who never ages, who isn’t into conforming, has seen it all and smiles as she watches it all over again.”