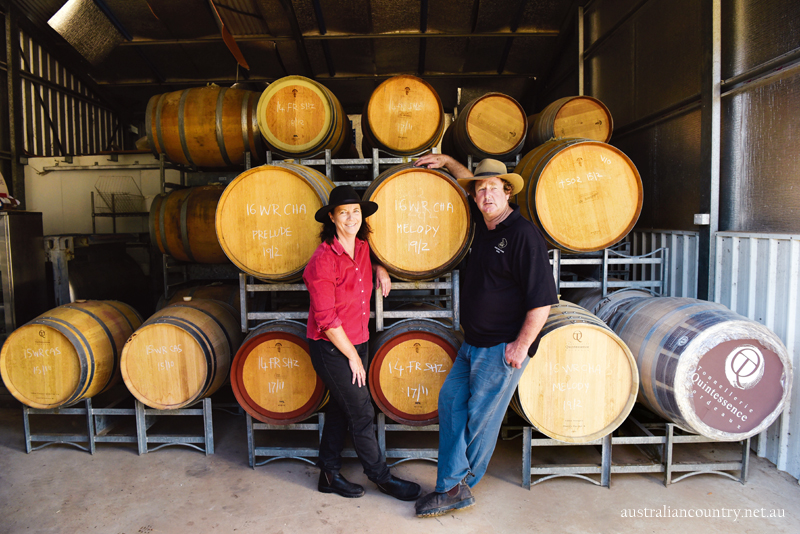 With something like 215 vineyards and 95 wineries and cellar doors in Western Australia’s Margaret River region, Cathy and Neil Howard knew they had to do something pretty special to make their Whicher Ridge winery stand out from the crowd. Making good wine was a given.

With their extensive backgrounds in the industry, and as Whicher Ridge attracted a coveted five star rating from eminent wine writer, maker and judge James Halliday in 2015 and 2016, as well as the ultimate nod as one of his 10 Dark Horse wineries in 2015 (for emerging labels in their first year of five stars), clearly they are doing OK in that department.

Hosting cellar door events including long table lunches and the South-West Petanque Championships each November was another strategy, but still Cathy believed they needed a more permanent point of difference to convince visitors that it was worth venturing off the beaten track to visit them at their Chapman Hill vineyard and cellar door.

“Apart from wine making, gardening is my other passion,” she explains. “My grandfather and father were keen gardeners and inspired me. Although I have never done any formal horticulture training, I have adopted many commonsense farming practices and ideas that I learned when I was studying viticulture at Roseworthy Agricultural College in South Australia.”

So it wasn’t too great a leap for Cathy to hit on the idea of a wine sensory garden. Inspired by one she had read about at Kendall Jackson Wines in the Napa Valley in California, she set about creating her own version Down Under, adapting the plants to suit their Mediterranean climate.

“As far as we know, apart from a small one at the Waite Institute in Adelaide, this is the only wine sensory garden in Australia,” she says. “We just built on the concept of a sensory garden that appeals to sight, smell, touch, hearing and taste, by theming the plantings to match particular wine varieties.”

Coloured flowers and foliage appeal to the sight, fragrant herbs and flowers provide the smell, other plants and ornaments are meant to be touched, while fruit and vegetables provide taste. The birds the garden attracts (including blue wrens, willy wagtails, bush wrens and robin redbreasts) add the sound component.

Having established their vineyard on a former dairy farm in 2004 and 2005, the Howards were no strangers to the fundamentals of creating a garden with the best chance of success. Cathy planned an organic figure-of-eight design, to counter the symmetry of the surrounding vineyard. Neil’s first step was to plant olive and lilly-pilly hedges to protect the garden from the often blustery winds.