At Home With History In Spring Park

Lil and Richard Westmacott have restored a remarkable slice of pastoral history on their southern NSW farm.

Lil and Richard Westmacott have restored a remarkable slice of pastoral history on their southern NSW farm. 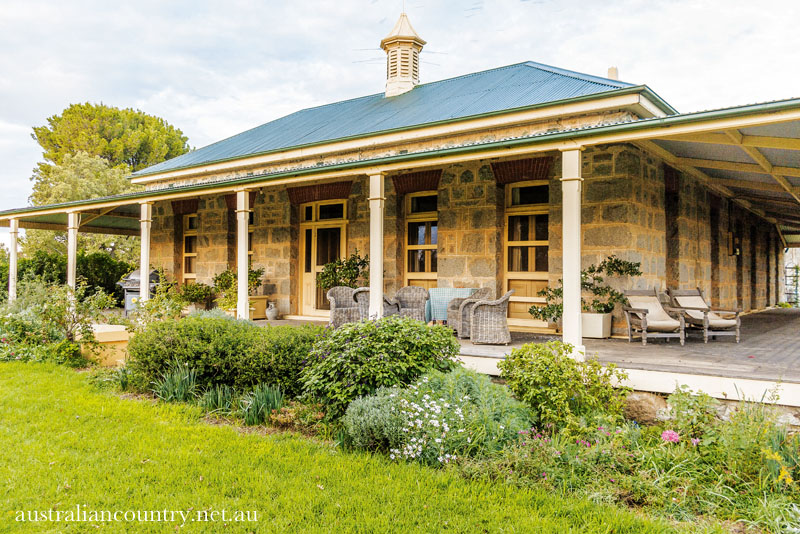 The precise reason is lost in the mists of time, but when the Tunney family built the homestead at Spring Park they installed a hallway the size of a cricket pitch. Precisely. The present owners, Lil and Richard Westmacott, who bought the property near Young in the NSW South-Western Slopes in 1986, understand the hall was designed to be wide enough to accommodate a dray carrying the granite blocks, which has been quarried elsewhere on the property.

But surely Jim Tunney, who took up Spring Park in 1872, didn’t let his children play cricket on the 22-yard link between the front door and the back wing and kitchen. Mind you, with a family of 22, he had enough offspring for a team and a few reserves. What is certain is that when he came to build the homestead, he chose one that befitted a man of considerable stature in the community.

He couldn’t have found a better site for surveying the 20,000-acre (8094-hectare) sheep and wheat property. The house, which has a roof area of 90 squares including the verandahs, cost 1200 pounds when it was built by Millards & Co of Young. It sits on a hilltop with 360-degree views of the surrounding plains and pastures, some of which now belong to the neighbours as the land has been reduced through the years to 1500 acres (607 hectares).

The six-stand shearing shed dates from the same era as the homestead and for many years neighbouring properties used the facility. Old rainfall charts and shearing tally books are among the treasured few items that came with the house. One book records that in 1942 nine graziers brought sheep to Spring Park for their annual hair cut.

These days, the Westmacotts run Dorset-Merino cross sheep and grow oats as an autumn feed supplement. The springs that gave the property its name provide water for stock, though most of the time it is too brackish for human consumption. Richard and Lil have learnt the hard way that water is a constant problem in the district.

They enlarged a dam when they first arrived and inadvertently rendered it unusable when a spring broke through the wall making it too salty for stock or even watering the garden. Fortunately the replacement dam is sound. Soil erosion is another long-term headache, which Richard has attempted to mitigate by planting hundreds of trees and using deep-rooted pastures.

A talented seamstress who makes many of her own clothes, Lil has made most of the soft furnishings, as well as the innumerable scraping, painting and polishing tasks that a renovation involves. She admits that the garden is almost a full-time job and describes the work they’ve put into the grounds as a constant work in progress.

“The house was built for a large family,” Lil says. “It comes alive when it’s full of people and it certainly will be that for the wedding. I sometimes think it’s a pity the original Tunneys aren’t alive to see it. I like to think that because we love the place they created so much, they’d approve of the things we’ve done.”