Pastiche of the Past

The Brennan family and their menagerie of pets have come home to roost near Mudgee, in the beautiful NSW central-western slopes

The Brennan children know the drill. It just wouldn’t be a weekend in the country without a couple of property inspections. So when the Sydney University health sciences professor, Patrick, and his wife, Elizabeth, headed to Mudgee for a weekend getaway, their children, John, Beth, Anna and Eoin, knew it would involve a few real estate windows.

“There was a collective eye roll when I suggested we look at another place,” Elizabeth recalls. “That was when the agent showed us Melrose Park. I could tell the moment Patrick stood on the verandah and looked down the drive that he was interested.”

That was January 2015 and by May the Brennans had packed up the goods and chattels that filled their previous historic home, Kelvin, at Bringelly on Sydney’s south-western periphery and made the move to the 250-acre (101-hectare) property nestled at the base of Mount Frome eight kilometres from Mudgee township. Eagle-eyed readers of Australian Country will recall that we first met the Brennans when we profiled the heritage-listed Kelvin back in 2016 four years after they had arrived in Australia from the UK. By that stage, the self-confessed serial renovators were on their third property in Australia, having previously honed their skills on a farmhouse in Ireland, a Victorian terrace in Dublin, a Georgian house in England and a 15th-century villa in Tuscany.

“It wasn’t that we didn’t love Kelvin, but Bringelly was getting built out and of course the best thing about Australia is the opportunity to have space around you,” Elizabeth explains. “I’ll never forget the move. We were in a convoy of three cars with all the family plus two cats and three dogs and a removals truck. At that stage, Patrick had a vintage car and a Porsche, which he had to nurse up the dirt road. Of course, now we’re Toyota people. But the things we loved at the outset, the unsealed road, the fact that the only traffic on the road were cattle and the sweeping views, remain big attractions.” The history of Melrose goes back to Mudgee’s earliest days and the property can claim association with many of the district’s founding families, including the Bowmans, Cadells, Baylys and Bells. The homestead is situated on the northern side of the Cudgegong River and overlooks rich alluvial plains to the south and west. The land was first granted to currency lad William Bowman in 1835. Already a substantial landholder in the Bathurst region, he received the 960 acres (388 hectares)on the condition that he clear and cultivate 70 acres (28 hectares) or spend £150 on improvements. He went on to acquire considerably more land in the district and served in both the NSW Legislative Council and Assembly.

William’s only surviving child, Ann Catherine, subsequently married Thomas Caddell, and Melrose homestead was built in 1879 as a wedding present for their third son, William Bowman Cadell, when he married Sarah Bayly, of the neighbouring property, Havilah. Upon William and Sarah’s deaths, the property moved into the Bell family adding yet another notable pioneering connection. From 1927 to 1965, the Short family became the custodians and they in turn sold it to Dr Brian Haynes, who renamed it Melrose Park. Dr Haynes and his son, Warwick, invested considerable effort and dollars upgrading the homestead during their 20-plus-years’ tenure. When Chris and Robyn Gilbey took over in the late ’80s and established a deer farm on Melrose, they hired Terry Scifleet to manage it. When Sydney consultants Michael and Anjo Tarte became the new owners in 1994, Terry stayed on and he now helps Elizabeth and Patrick look after the property, marking more than 30 years’ continuous connection with the farm.

“Terry looks after everything practical,” Elizabeth explains. “We couldn’t have achieved half the things we have without his help. I have these bright ideas and Terry works out how to make them a reality.”

In the relatively short time since the Brennans arrived, they have converted a former dairy into self-catering accommodation and repurposed three silos as a glamping venue. One silo now serves as a living and dining space, the next as an open sleeping space with four beds and the third is a combined bathroom and washroom. There’s an undercover barbecue and a huge firepit surrounded by tree stump seats for enjoying marshmallow toastings under the blazing night sky. When Australian Country visited, Terry and Elizabeth were up to their elbows in their latest project, converting a former cow and shearing shed into a function space for daughter Beth’s upcoming wedding.

“It’s times like this that you really realise what a wonderful community Mudgee has,” Elizabeth says. “The town itself is gorgeous, no traffic lights, no mall, but with lots of coffee shops and dining options. That’s because the two main industries are wine and mining so both sectors demand a level of amenity that you won’t get in other towns of similar population. Tourism is growing off the back of that, and the district is emerging as a wedding destination.”

The homestead is typical of many of its period, designed around a U-shaped courtyard, which contains a large well and vine-canopied shade structures for protection from the harsh summer sun. Impressive cedar double doors at the front entrance lead to a central hallway, with a master bedroom, bathroom and study on one side and a drawing room and dining room on the other. Shuttered French windows open to the verandah that protects this main building, and two service wings run along either side. One now contains the kitchen, family dining room and a couple of guest rooms, while the matching wing contains more bedrooms and bathrooms. The entire house is built from bricks fired on-site and original features include marble fireplaces imported from Italy, stone sills and a bell system once used for summoning servants. “As with any old property, there are always areas that need attention,” Elizabeth says. “We’ve tried to create a family home that is respectful of its history without being a slave to it.”

While Elizabeth bases herself at Melrose and the two younger children attend school in town, the adult children spend weekends and holidays on the property and Patrick divides his time between the farm, Sydney and wherever his research takes him. The whole family continues to enjoy holidays in Tuscany, where they have recently bought and are renovating an 18th-century villa.
“It wouldn’t feel right if we didn’t have a project on the go,” Elizabeth says. “For now, though, we couldn’t be happier with our home in the country and the lifestyle it affords.” 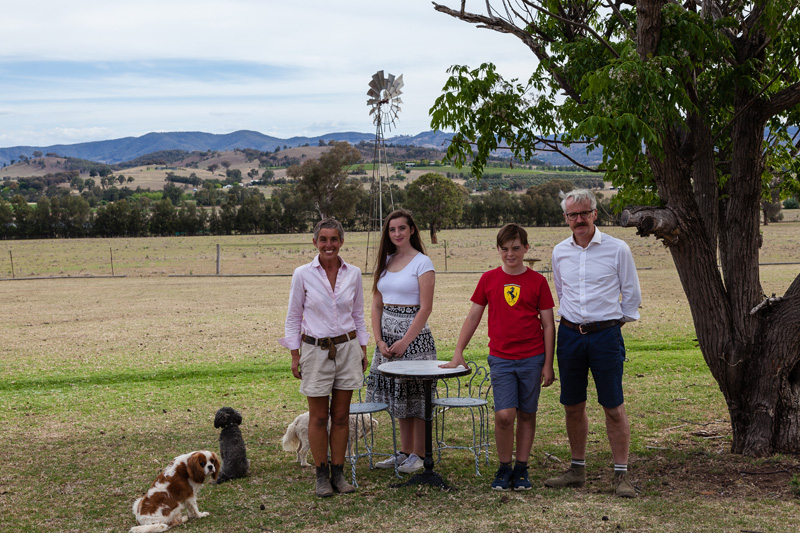