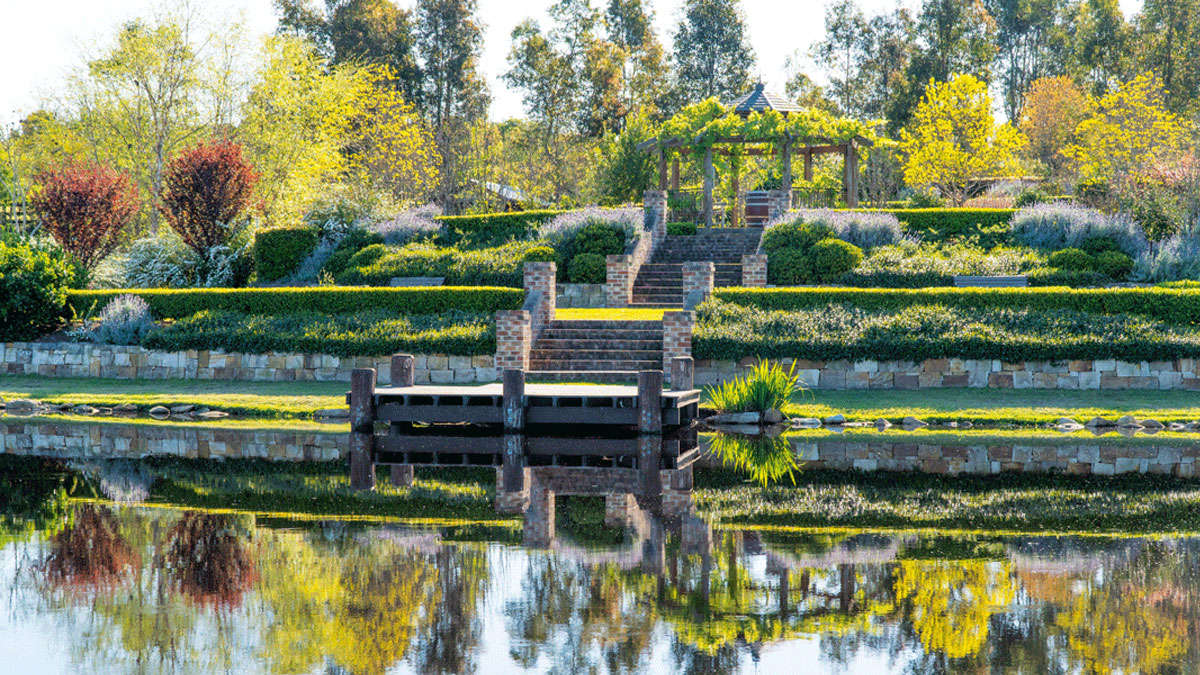 European gardens have inspired the Bath family to create a space that celebrates their talents and welcomes enthusiasts.

Two things precipitated the Bath family’s move to Maitland 19 years ago – a tiring commute to work each day from the Central Coast and a growing family that needed more space. Benjamin and Sue Bath decided to relocate to a town where industry and infrastructure could improve their teenagers’ future job prospects. After extensive research, they found a four-acre (1.6-hectare) parcel of land, with nothing of note on the property except a lake which they thought may be useful.

The family of six lived in a garage onsite while they built their house. Within two years they had moved in, welcomed a fifth child and found time to give the garden some thought. The terrain was undulating down towards the lake with the soil alluvial and rich in clay. If disturbed too much, it compacted down and became unstable, but it was generally ideal for planting. Starting around the perimeter of the house, the Baths planted a garden extending to the hedge. “We sort of stopped at the hedge and the rest of the property was a paddock because we had a couple of cows,” Sue explains. “Eventually all the cows bar one went and the one that stayed became a pet.”

As their children grew and they found their leisure time expanding, Sue and Benjamin travelled to Europe to explore inspirational gardens, finding favourites in Italy, France and England. They marvelled at the way these botanical spectacles were accessible to the public and the eagerness of people wanting to share in and appreciate the spaces. “We were always searching for gardens in Australia, and we thought, why can’t we do it?” she says. “So, we decided we would start to expand our garden. We kept gardening into the paddock and the paddock kept shrinking. The cow had to go anyway because she was getting too old.” With encouragement from a group of elderly people who requested their garden as a morning-tea venue, Sue and Benjamin discovered the thrill of hosting and were further spurred on.

The design concept was a shared experience – with Sue the self-proclaimed, “chief designer” who runs her ideas past Benjamin for approval. “He adds his manly bits,” she says. “When you put them both together, we’ve ended up with a good thing.” The intent was for seamless flow from one space to the next, rather than individualised spaces with individual personalities. Sourcing plants from a wholesale nursery on the Central Coast, they opted for truckloads of stock to be delivered at a time.

Textures, form and perfumes are diverse. The dominant colours are pinks, blues and whites with lavender sprouting throughout as well as in a small, contained patch. It’s hard for Sue to choose a favourite species as she says each season presents such different delights. “We have a lot of roses, and they are just spectacular, but the jonquils come up late and the fragrance is just divine.”

Most of the watering is either from rainwater capture or from the lake, which is actually a dam. The walls were edged with rocks and a pump and sprinklers were connected to the oasis. This asset has determined the size of the gardens, some of which are extraordinarily large. The Bath offspring have also been instrumental in the garden creation. The wrought iron features were sculptured by one son, and electrical and building work including the bridge were an opportunity to hone proficiency. “Our children have actually helped us a lot in the building of the garden,” Sue says. “They all contributed in different ways depending on their skills and abilities while they were living with us”

To broaden her botanical experience Sue is studying floristry at TAFE, an added skill for hosting functions and events at the Bath House Garden. At open days once a month, she loves chatting to garden enthusiasts and engaging with the public. “People are always very positive and very, very encouraging,” she says. “They say how peaceful it is and we often get comments about how it flows nicely.”

For Sue, waking up at the Bath House Garden is unbelievably special. Each window captures a stunning view and the garden attracts an abundance of wildlife. “You would not believe what we had in the garden the other day, an echidna,” she marvels. Until recently, there were three dogs on the property, but she says now the shyer animals are starting to feel bolder and emerge. Her daily dose of nature invigorates her, “I actually love going out and getting dirty, but I also love going out and gardening where I don’t get dirty,” Sue says. “It’s my sweet spot, the place I go to regain my energy and sometimes my composure.”