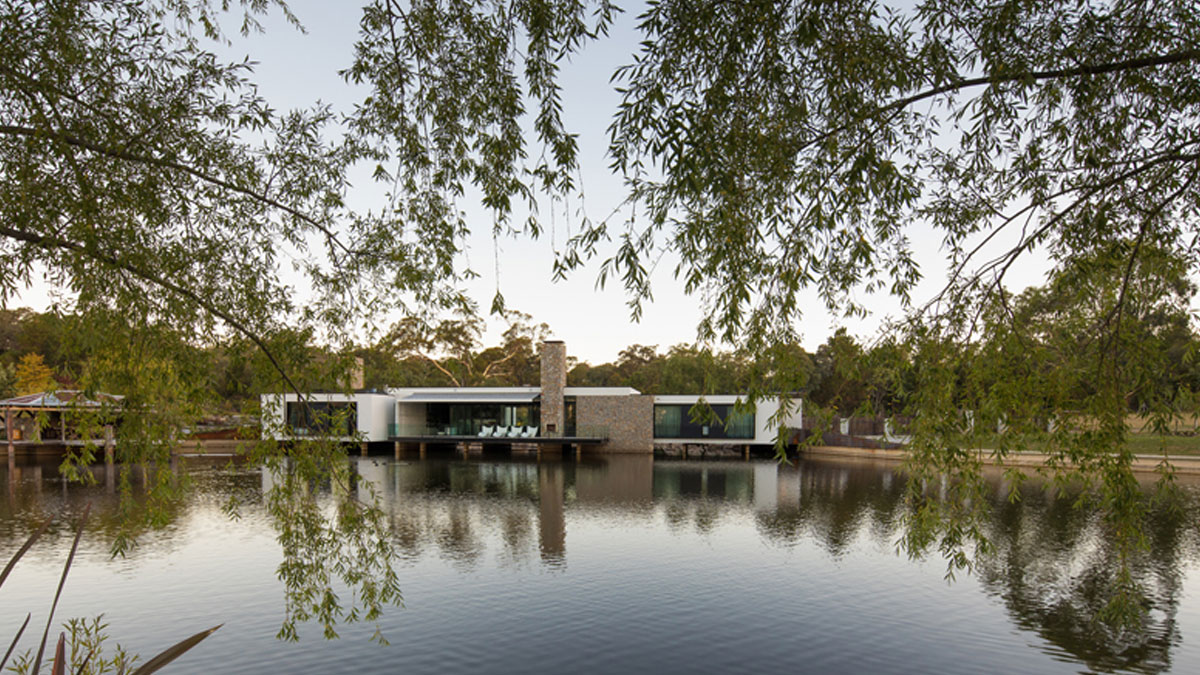 Forget beer budgets. Grace and Fernando Ferreira cheerfully admit they had Champagne taste on a water budget when it came to their new home on a semi-rural site close to Queanbeyan and with easy access to the national capital. With an owner-builder’s licence, some creative recycling and a design by Collins Caddaye Architects (CCA), they have been able to create a showpiece home that fulfils all their aspirations for a hospitable hub that can comfortably accommodate just the two of them or the many guests who routinely respond to their generous natures and open-door policy. 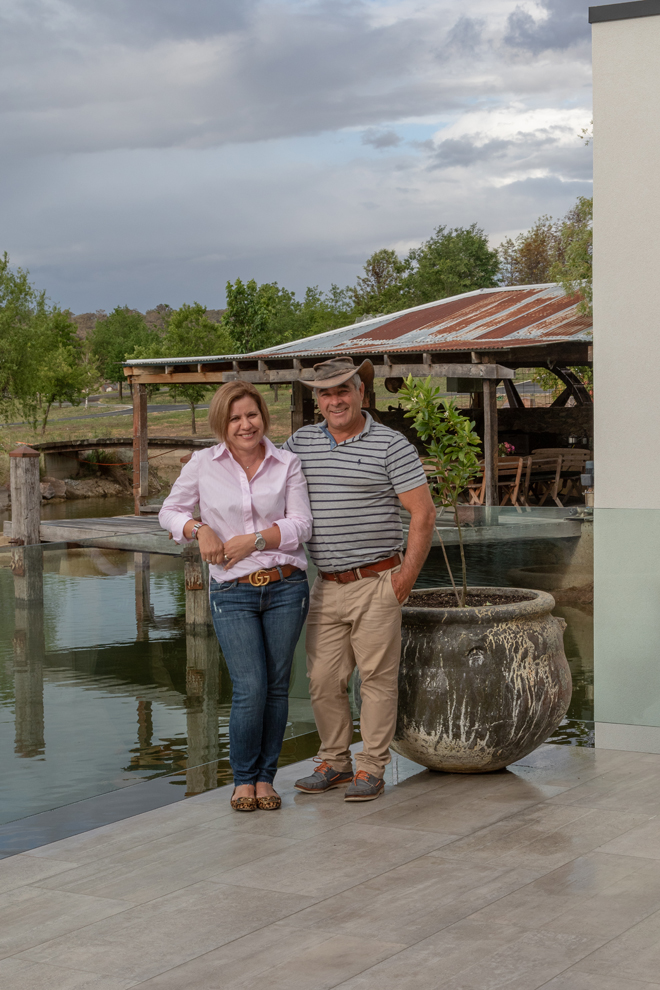 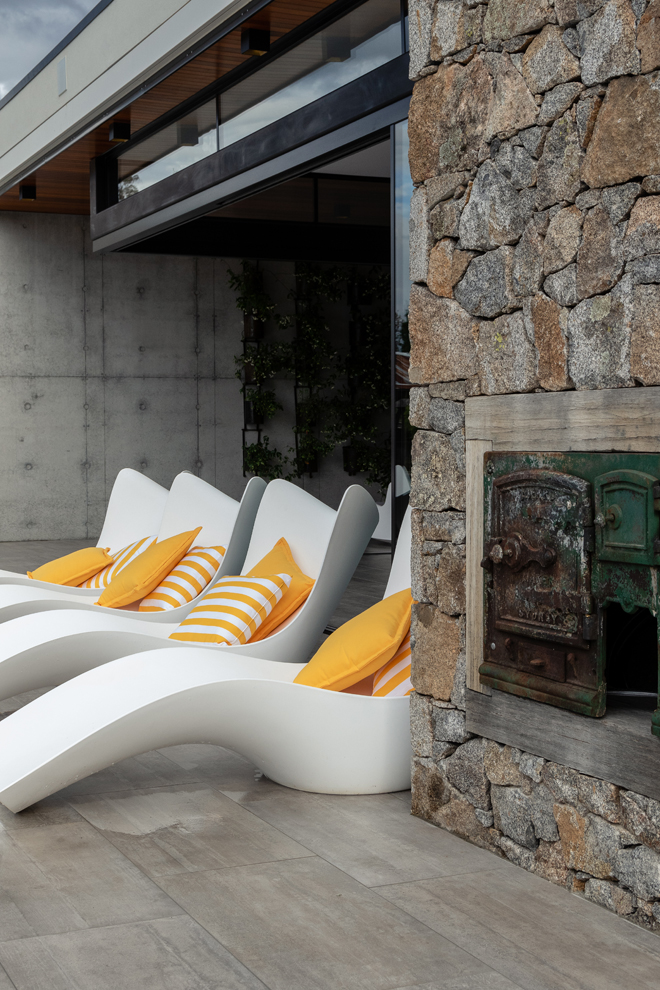 Portuguese-born, Grace had spent time in Australia when her parents moved here when she was in primary school. She returned to her home country in 1987 and met Fernando the following year. They dated for five years, before the notion of coming to Australia became a plan. “We came to Queanbeyan because that was where my father lived,” Grace explains. “I hated it for five years, then our boys were born and we started a commercial formwork and concreting business. These days, I never even think of moving back to Portugal.”

Fernando had always dreamed of living on a farm, but Grace was not so keen. When the boys broke so many windows playing backyard football that the glazier knew the dimensions of every window in their house, Grace eventually conceded that they needed more space and the search for a property in the near country became serious. Although they had planned to buy a vacant block, they couldn’t find anything with the infrastructure they required, so in 2001, they settled on a property with an existing home. 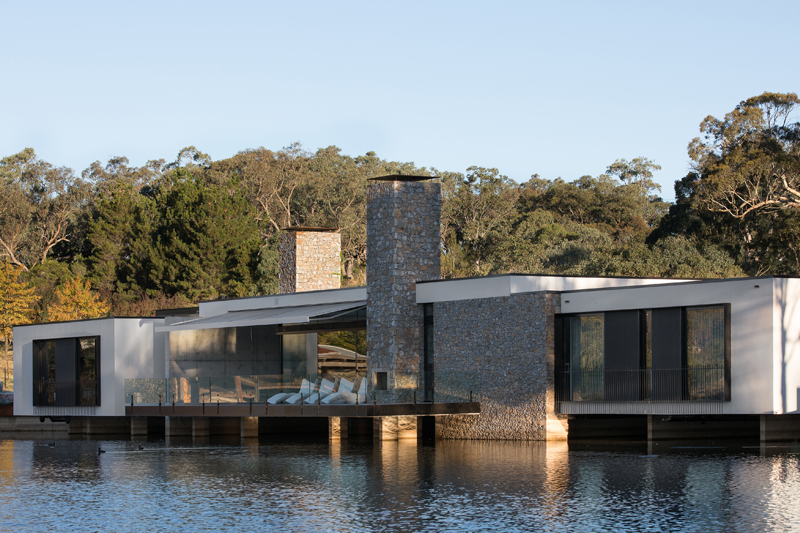 “We thought we’d live in it for two years and knock it down,” Grace says. “But then we decided to keep it as a guest house because we have a lot of family and friends from Europe who visit for extended periods.”

The Ferreiras knew they wanted the house to have views of a large dam on the property. They’d even planted a row of willows along the far side, partly as a windbreak, but also to enhance the view when they eventually built. However, on the day CCA’s Andrew Collins arranged for the site visit, there had been heavy rain and the dam was flooded. “So he came up with the idea of extending the dam into a lake and building the house over it, not just near it,” Fernando says. “Now you actually have to cross a bridge to get to the house and it feels like the building is floating on the water.” 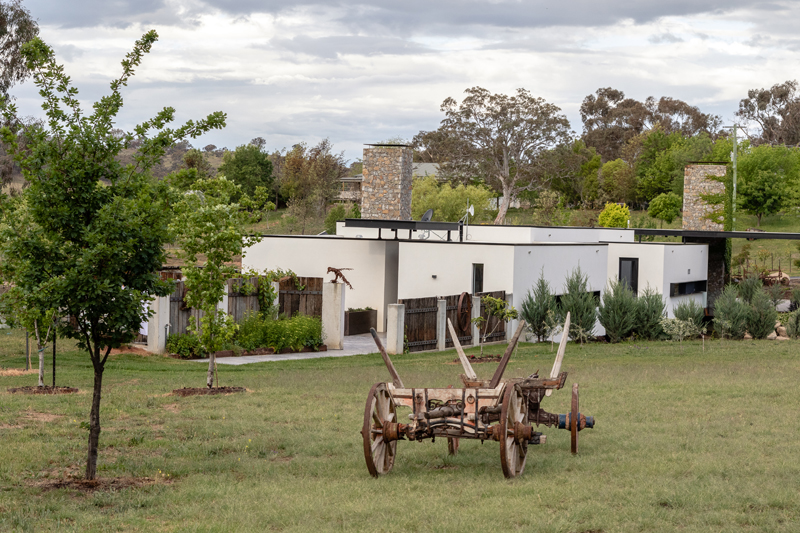 Keen to make the build as sustainable as possible, the Ferreiras wanted to incorporate as many recycled materials from their business as possible. This included unlimited concrete, local stone boulders, heavy-gauge plate steel and a large food storage coolroom from a client’s building demolition. The steel plate was used as sun shading and for landscaped wall components, while the edges of the dam were formalised with leftover concrete. Concrete blades also allow free passage of water under the building.

“The coolroom panels were 200 millimetres wide so they were perfect for insulating the building,” Fernando says. “Andrew’s design used them as the corners of the house, which extends in a long rectangle across the lake. To maximise the views, he filled in the gaps with floor-to-ceiling glass. We don’t have air conditioning but we did install in-slab hydronic heating. Because the dam is so deep, the water is a pretty constant 16°C, so it cools the house in summer and warms it in winter.” 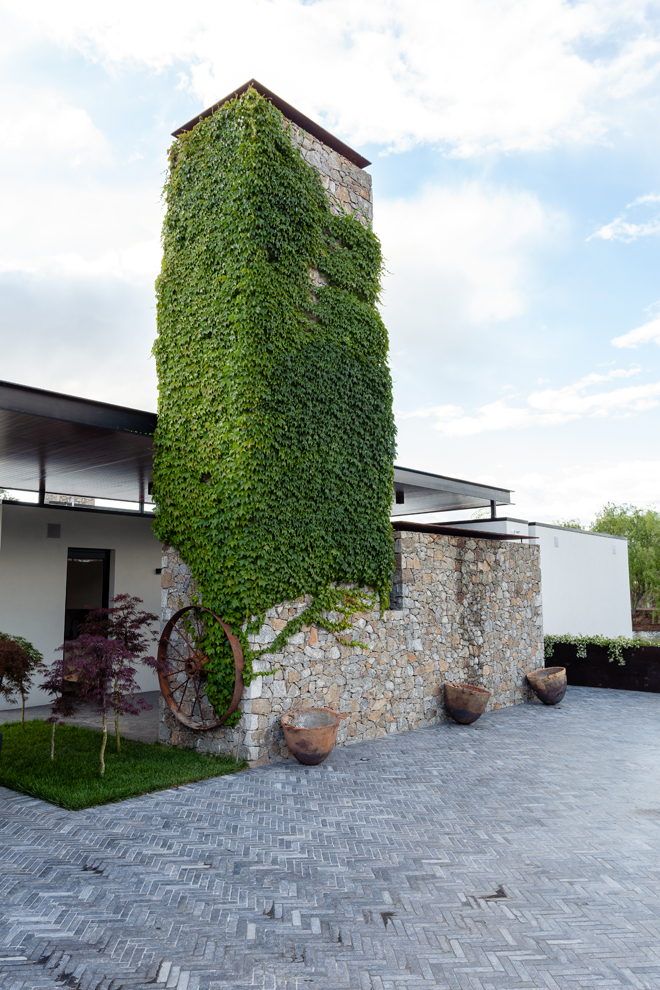 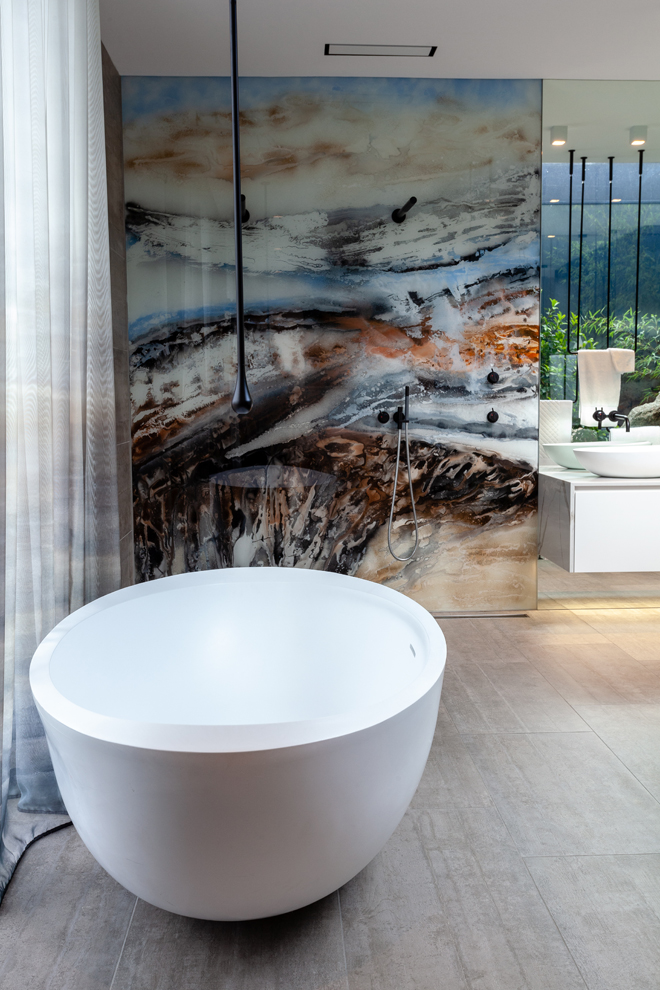 Grace adds that her primary requests were for a big laundry and kitchen and a space that was functional, easy to clean and could comfortably host large groups. “We’re entertainers and we plan two hours ahead,” she says. “So we can get up on a Sunday morning and decide to invite 20 people for lunch. We wanted to be able to seat them around our 4.5-metre table, which was made from timber from an old bridge from Bungendore, so the dining and living space had to be big to accommodate it. At the same time we didn’t want anything too precious. The view is the showstopper. We’re simple, rustic entertainers, so we serve lots of hearty food and we mainly want our guests to be able to sit back and relax.” 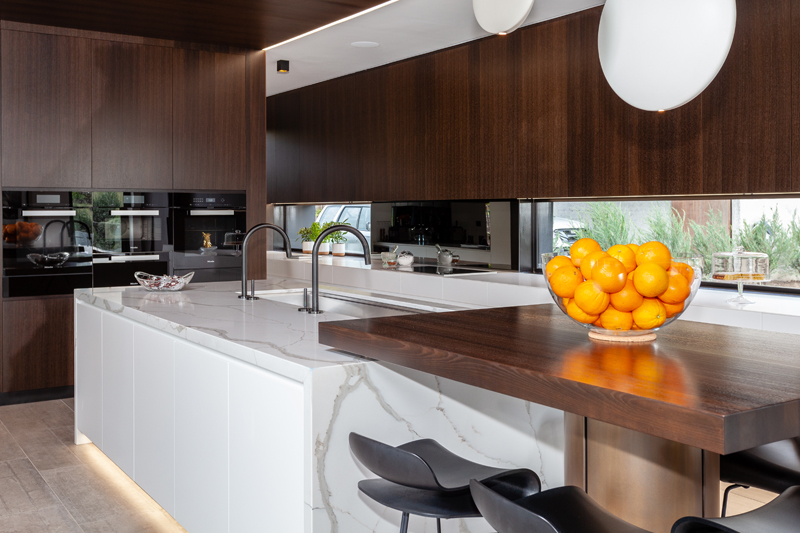 The living space opens to a wide deck, which means that the Ferreiras can easily fit 120 people for a party. They’ve also added an open barbecue shack on one side of the dam, with a rotisserie grill perfect for slow-cooked chicken, pork and lamb. Fernando is an inveterate collector of old farm equipment so a waterwheel drives the rotisserie and provides an eye-catching entry statement.

Towering stone chimneys for the outdoor fireplaces anchor the building at either end, planter boxes are made from recycled buckets and the entry bridge is repurposed steel from a decommissioned crane.
There are two guest rooms at one end of the building and the master bedroom at the other. Fernando and Grace’s retreat features an open ensuite, with a mural by local artist Claire Primrose on one wall. 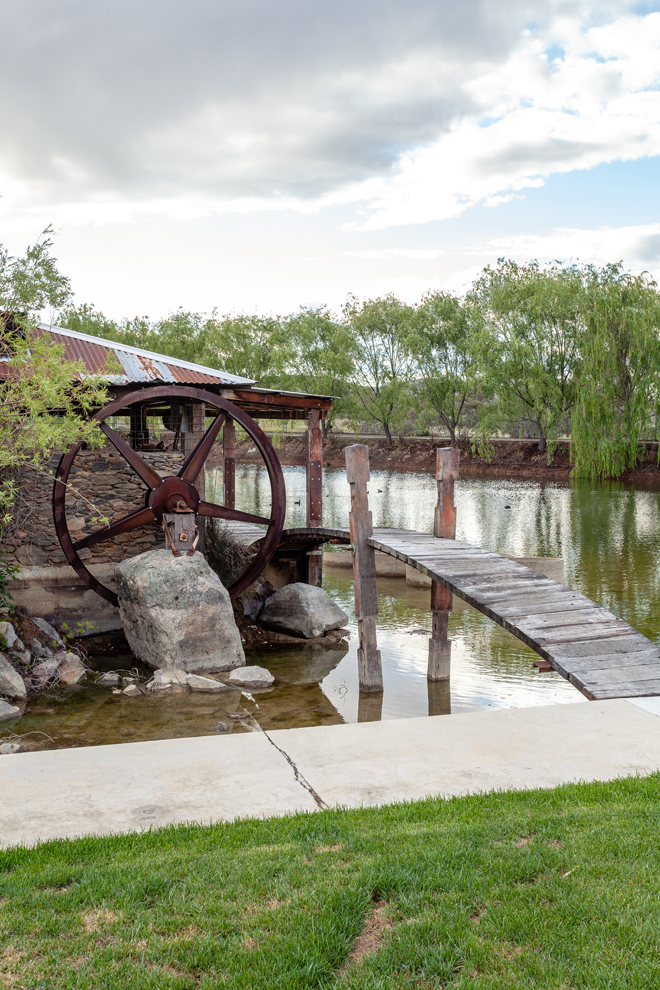 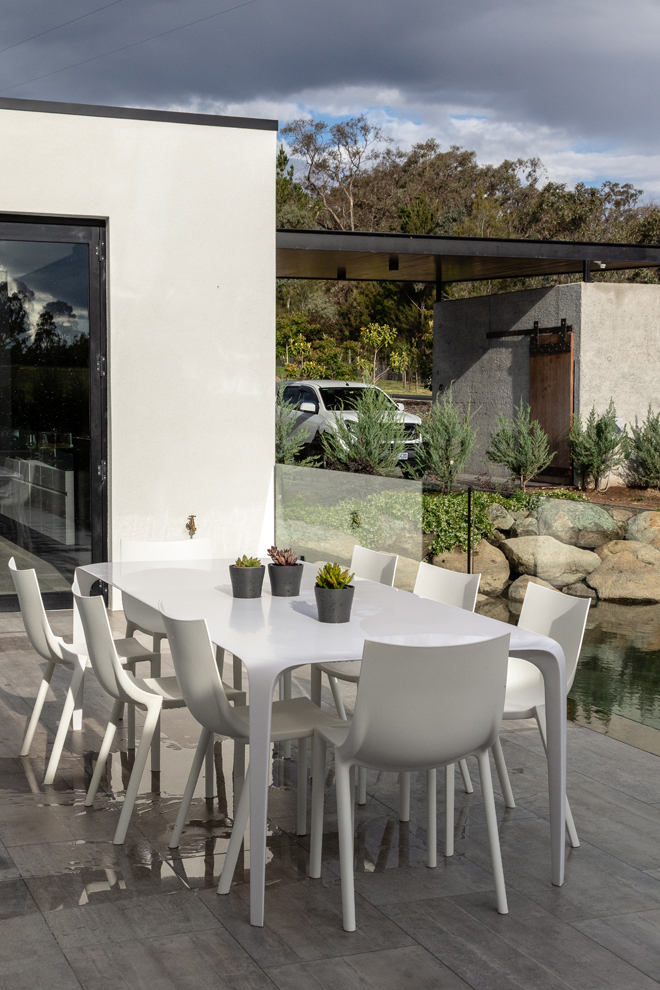 “We couldn’t be happier,” Grace says. “Guests who are visiting for extended periods stay in the original house and come to our place for meals and parties. So they get to have their own space when they need it. Fernando keeps threatening to build another house. He wants to live even further in the bush. But I am perfectly happy here. I don’t need to live with cows.”