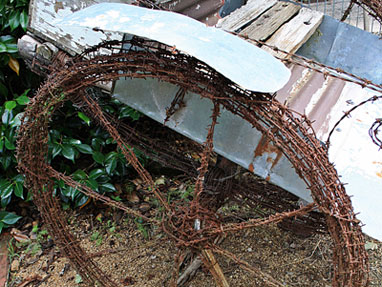 Story and photography by Jaqui Cameron

It wasn’t until Glen Thearle needed an excuse to escape a ladies afternoon tea that he locked himself in the back shed of his Crookwell garden in the New South Wales Southern Tablelands and looked around for something to do. Always artistic and ‘hands on’, Glen picked up a coil of rusty barbed wire left in the back corner of his shed and a pair of old pliers and set to work.

When the ladies left a couple of hours later Glen emerged from the shed with a life-sized sculpture of a duck complete with intricate webbed feet, eyes and beak, all crafted from the rough wire. That was six years ago and since then Glen’s unique menagerie of barbed wire animals and sculptures has grown and spread to gardens all across the country. “I’ve created alpaca, a pony and even an elephant,” Glen says, although he hastens to add, “the elephant wasn’t life-sized! My aim is to make each animal authentic so I do a lot of research to make sure I have the right dimensions and the correct characteristics. Each design is meticulously drawn and measured before I pick up the pliers.”

One of Glen’s most complicated creations was a sheepdog at work, complete with a merino ram, ewe and lamb. “That took a bit of time and a lot of wire,” Glen says. The dog took a roll of wire, the ram three rolls, all the clips were handmade and the finished product took several weeks of painstaking work.

Living on the edge of the river in Crookwell the softly spoken Glen always had an eye for the unusual. His manicured garden and home are filled with creations which have emerged from objects most people would simply throw away. “I don’t collect junk, but I do see potential in things most people would consider to be junk,” he explains. “I started working with wood, making garden gates that were also abstract sculptures and selling them at local markets. One day I took my barbed wire duck, a dog and a lamb along with me to show. They sold straight away and the orders have been flowing ever since.” 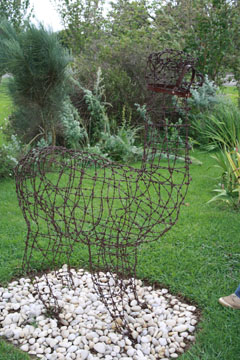 Glen is mad about dogs so they are a particular favourite to make as he already knows and appreciates the different build and character of each breed. “Every dog I make has a unique personality depending on the way I shape the ears or the way the dog holds its head,” he says. “It is amazing the detail and the emotion I’ve found I can capture using rusty barbed wire. I thought it would be really unforgiving but it’s surprisingly versatile.

Glen adds that his most common commission is the Kelpie. “I like making kelpies because they hold themselves with such stature,” he says. “Standing or sitting it’s a real challenge to give each dog that sense of alertness so innate in a working dog.” The idea of a working dog being made out of old farm wire seems to make sense, although Glen explains it is usually the farmer’s wife who contacts him. He says perhaps the lady of the house is keen to demonstrate the hidden potential of that rusty pile of wire found up against most farm sheds.

He has found only old barbed wire has the flexibility he needs to sculpt his designs so he relies on local farmers to give him a call when they pull down an old fence. Glen says they’re usually quite happy to get rid of it. Glen’s hands have suffered for his art and arthritis now limits the time he can spend using his pliers.

That said, word of his skill has spread and he hates to disappoint so Glen does accept occasional commissions that inspire his creativity. The result is a wonderful selection of quirky sculptures including a large pear for a nursery selling pear trees and an emu that went to a member of the armed forces in Western Australia as a representation of the crest. “I was asked to make a parlour chair and table for a garden in the Southern Highlands,” he says. “It was an incredibly intricate design and looked very glamorous but I’m pretty sure it wasn’t very comfortable.” And in honour of the afternoon tea that lead to his discovery of barbed wire sculpture Glen made a his wife a delicate, albeit rusty, teapot which now has pride of place in their kitchen.