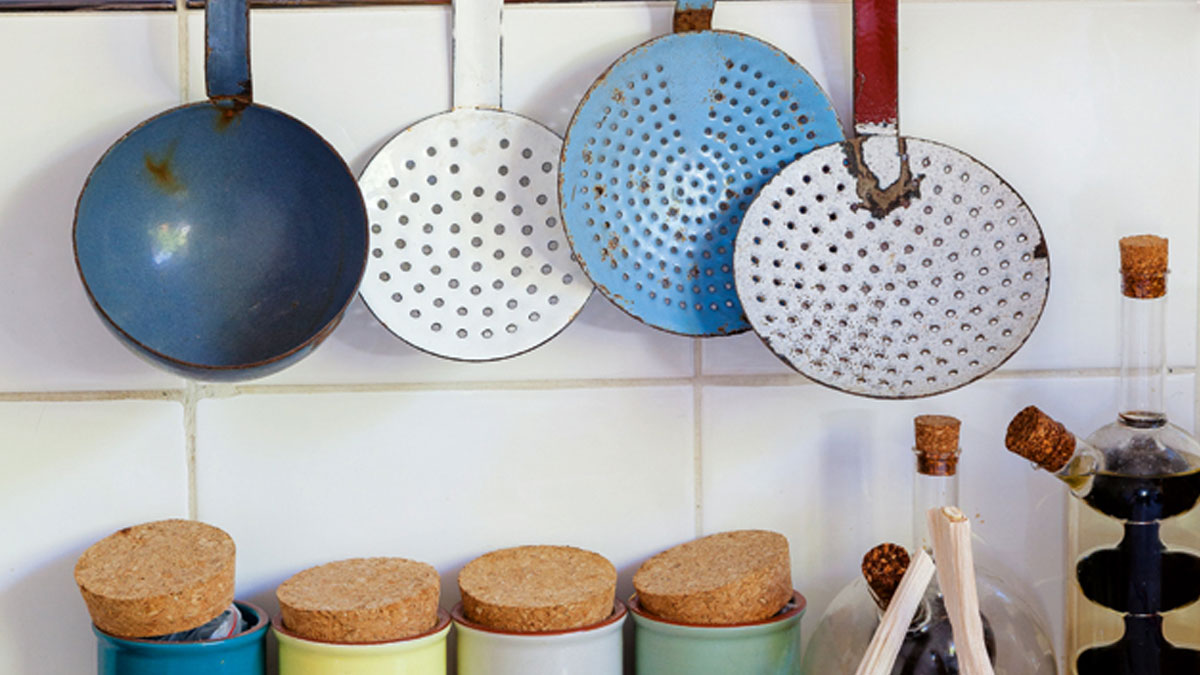 Mistress of the Marche

By her own account, Kathy Rupp has passion for all things French, which began in high school. Quite possibly with her first French lesson. But certainly, by the time the Albury French teacher was 15 and went as an exchange student to Lyon, she was well on the way to being an avowed Francophile. Little did she know that it would be the start of a life-long love affair with the city, and that it was where she would meet her future husband, Jean-FranÇois. 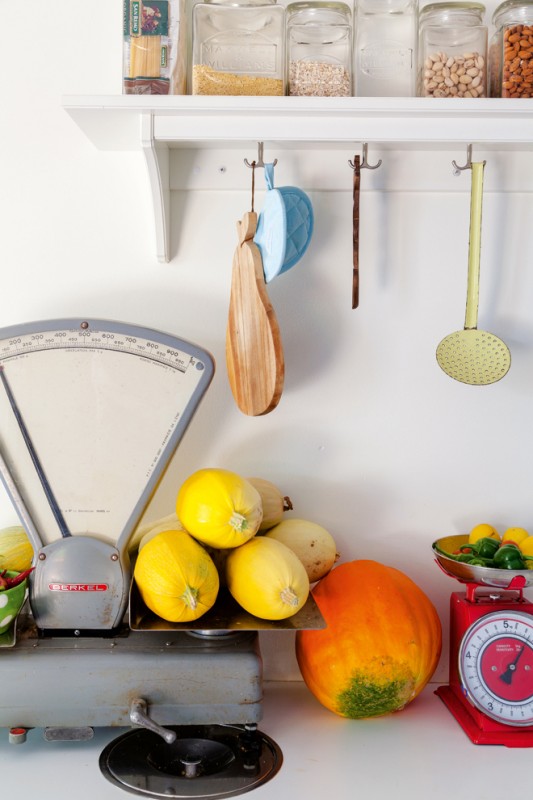 Regular readers of Australian Country will remember J-F, or Jeff, as his Australian friends have nicknamed him, from our Victorian High Country story in the July/August issue. He grew up in the French Alps and has established Alpine Nature Experience near Mt Hotham, serving cheese fondue in a tipi during the snow season and offering overnight accommodation in eco-friendly snow domes set up around the tipi.

“I grew up and went to school in Albury,” Kathy explains. “Then I went to Sydney Uni to study arts and languages, and when the opportunity arose to go on exchange as part of my degree naturally I chose to return to Lyon.”
The World Heritage-listed city is famous as a silk-manufacturing centre and the capital of French gastronomy. It’s the home of coq au vin, the quenelle, marron glacé (candied chestnuts), the famous father of nouvelle cuisine, Paul Bocuse, and the curiously titled cervelle de canut, literally silk worker’s brain, which is actually a herb-studded fresh cheese dip. 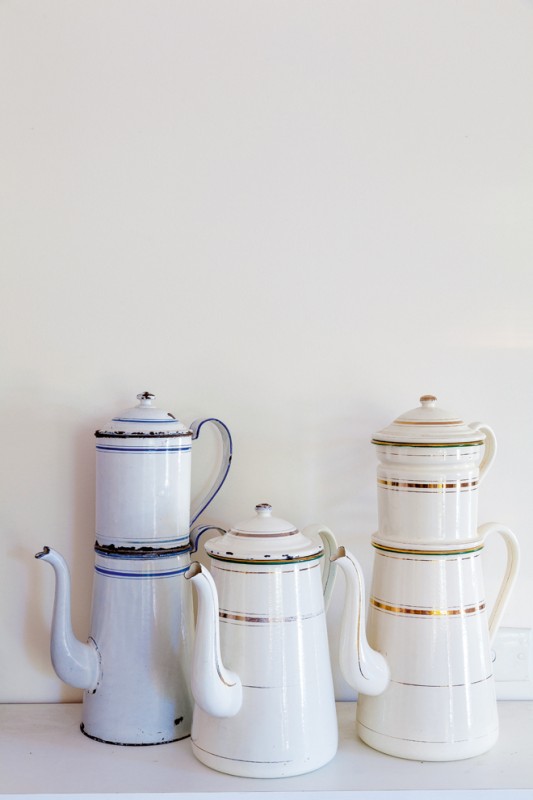 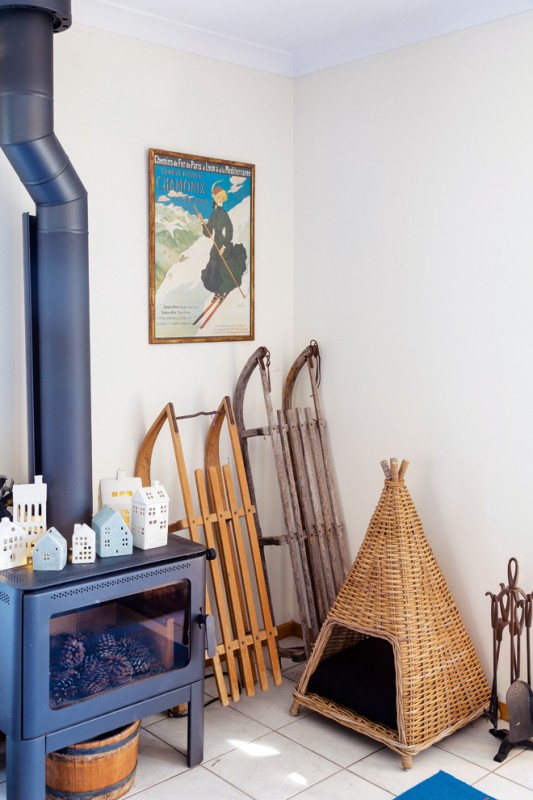 The Lyonnais experience planted the seed of a dream to start a little French cafe in Albury for Kathy, who is a keen cook and talented baker. But for now, she has her hands full teaching French at a local school, studying part-time for a Masters degree and, in her “spare time”, running a French brocante (vintage wares) market online.

Jean-FranÇois first came to Australia to better his English in 2004. The planets began to align for him and Kathy when he came back several years later to do post-graduate studies in marketing and advertising. He met Kathy’s brother at the advertising agency where they were both working. When J-F learned that Kathy was returning to France for another student exchange, he suggested passing on his contacts as he was also about to return to Lyon.
“My brother said ‘she speaks French, she’ll be fine’,” Kathy recalls. “But he did give me J-F’s number. I forgot all about it until I arrived in Lyon and discovered the accommodation I’d arranged was a cockroach-infested studio. In desperation, I rang J-F and learned he was also looking for a share house. We found a perfect place in the old town, right in the heart of the silk weaving district.” 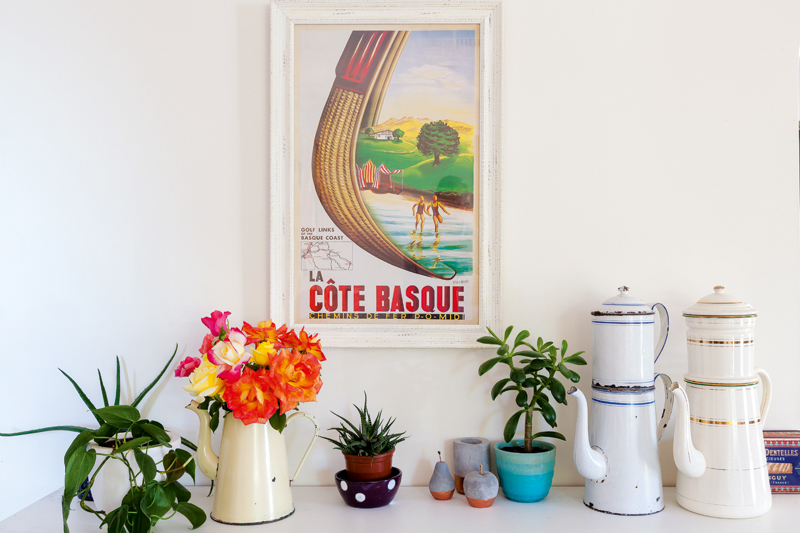 The rest, as they say, is history. By the time Kathy’s brother arrived for a holiday they were able to offer accommodation in the newly spare bedroom.

The couple has divided their time between Australia and France ever since. “When we came back here to live initially we planned to spend just six weeks in Albury to catch up with my parents,” Kathy says. “Then Jean-François got a marketing job for Campbells Wines at Rutherglen, and I started managing a restaurant. Six weeks became 12 months and we bought a house. We came back from another holiday in France and I got the teaching position. So now it looks like Albury is home for now. We’re both keen to run our own businesses and Albury has good energy about it, being at the centre of a food and wine producing region with a big enough population to support new ventures. My brother and sister-in-law have also moved down from Sydney and have started a letterpress printing business.” 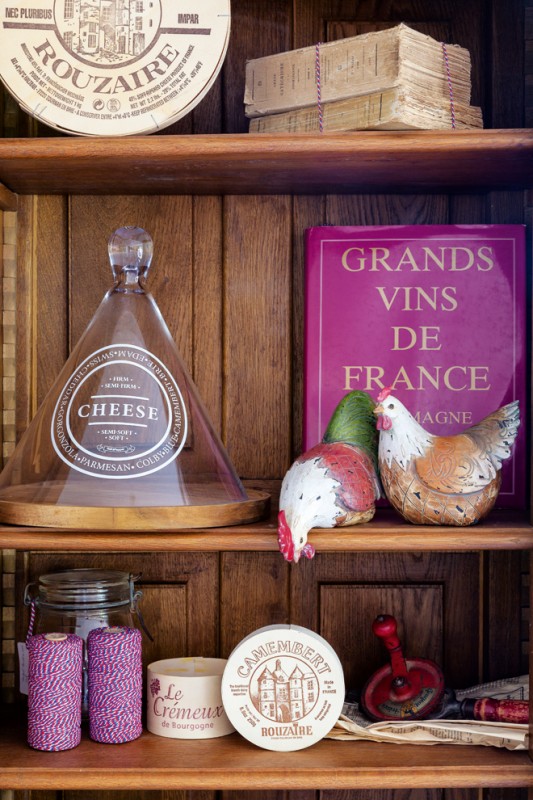 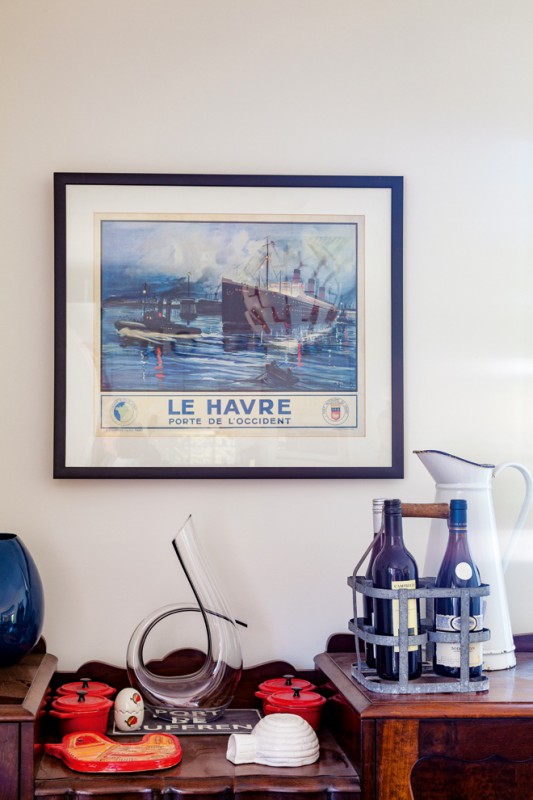 In the northern summer of 2016, just before one of their extended trips to visit family and friends, Kathy hit on the idea of scouring the vintage stores, vide greniers (attic sales) and marchés aux puces (flea markets) to buy vintage furniture, linen, and kitchen accessories to bring back to Australia to sell. “I knew that to make it work I’d have to bring back a container,” Kathy says. “So before I went, I contacted various homewares store owners in Albury and nearby towns including Beechworth and Wagga Wagga and a local event stylist to gauge their interest. I was both surprised and delighted when they all responded  most enthustiastically.” 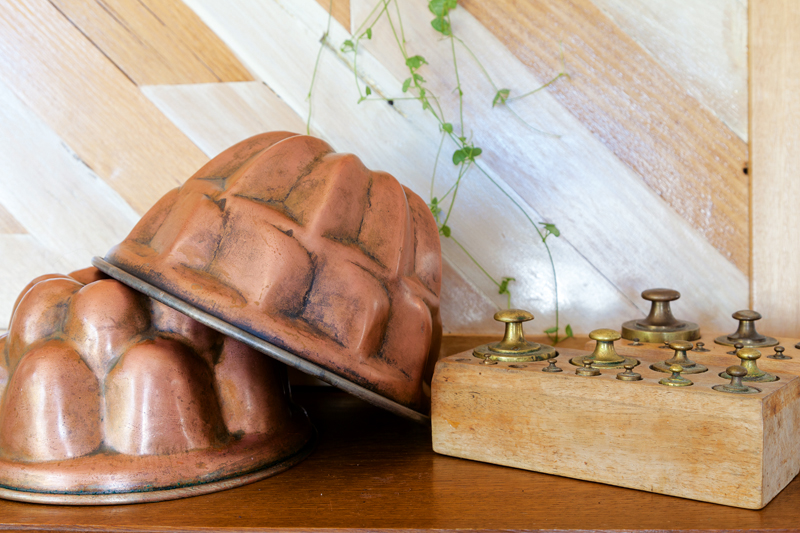 What followed was like a five-week scavenger hunt from one end of France to the other. Jean-François and Kathy cleared out a shed at J-F’s grandparents’ home near Auxerre-Moneteau and the couple covered almost 10,000 kilometres as they scoured the countryside for everything from enamel signs and posters to table and bed linen, coffee pots, crockery, cutlery and furniture. Back at base the whole family pitched in, waxing tables, secure-wrapping breakables and loading the bounty onto pallets. At nights Kathy hit the internet, posting pictures of potential purchases to clients back in Australia and anxiously waiting the go-ahead to buy on their behalf. Finally D Day arrived and the container was loaded.

“It was exciting but stressful,” she recalls. “Because it was our first time, we were nervous about customs and quarantine. We were acutely aware that one borer could hold up the whole container, so we went over every purchase with a fine-tooth comb. When it came to packing the container, we were mindful that any empty space was money lost. It was all a huge learning curve, but a very rewarding one.” 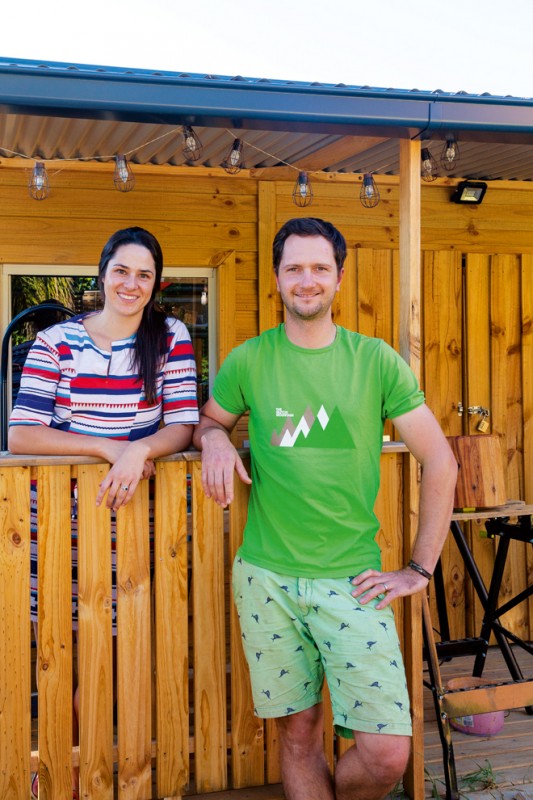 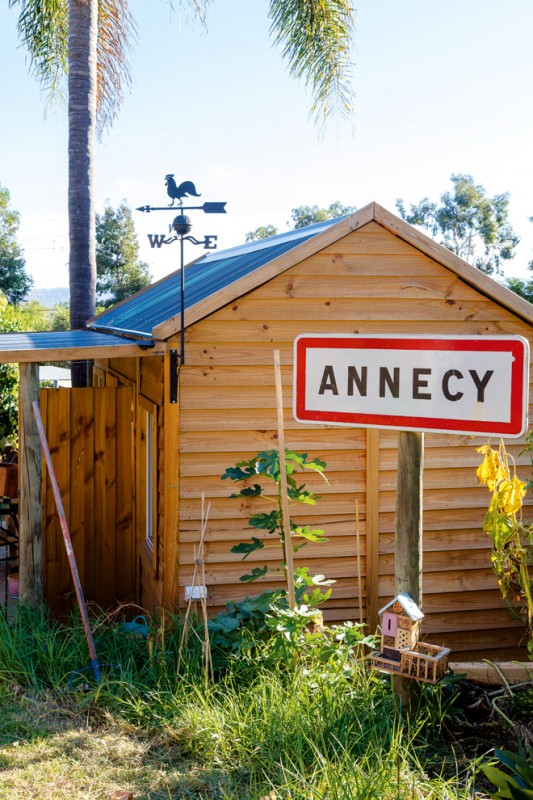 Back in Albury, Kathy dispatched the purchases that had been bought on consignment, then sold at local markets and operated a pop-up store for a couple of months. Under the moniker Kathryn Collection she established an Etsy and Facebook presence, and continues to sell her finds online.

“It was a truly amazing way to get to know the French countryside,” she recalls. “If the teaching position hadn’t come up, I’d have done it again, but it has taken a bit of a backseat for the time being. However, my little French dream is still very much alive, so who knows? The cafe, or an importing business, or even market shopping tours through France might eventuate.”