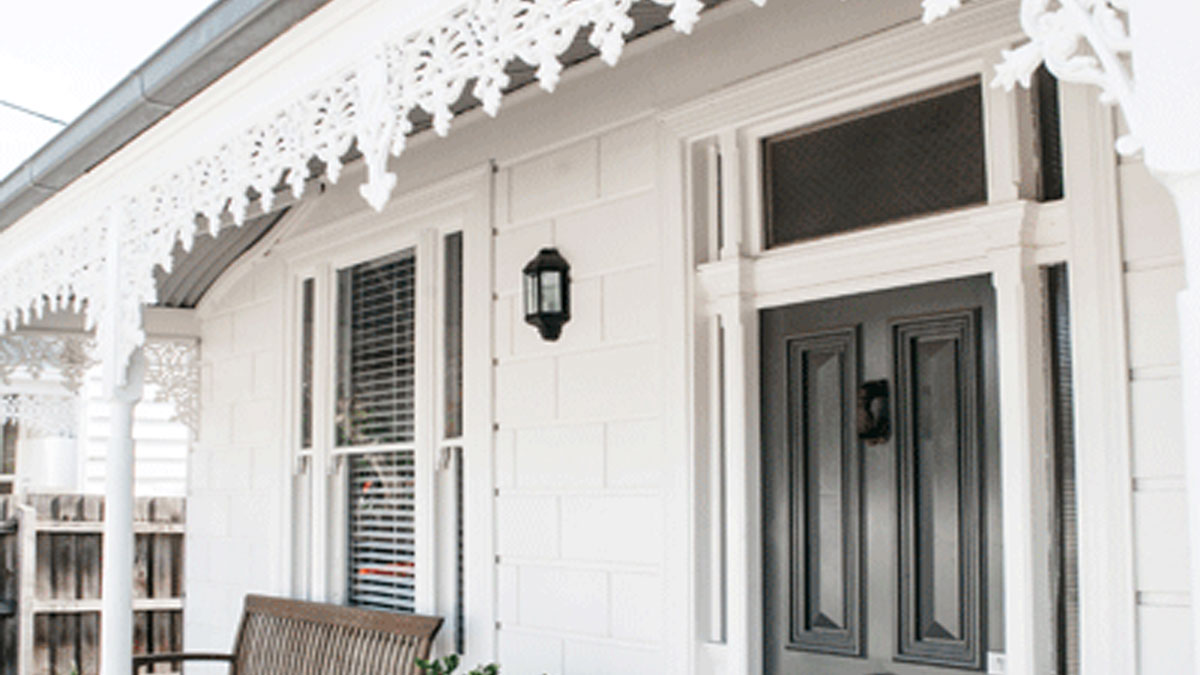 An old wooden propeller on the bedroom wall speaks volumes about Sally Croucher and Michael Ducksbury’s life and loves. Shipped back to Australia from England by Sally’s parents, the prop served for years as a coat hanger in her grandmother’s home in Kent. Now 100-years-plus piece has pride of place in the restored Victorian cottage the couple share with Sally’s sons, Lachlan (16) and Henry (14) Burke and Kumar the rabbit.

Sally’s dad was a TAA pilot in the 1960s and met her flight attendant mother through work. Sally has followed in her parents’ footsteps and has been a flight attendant for 30 years. She also met her customer service manager husband Michael on the job and he too has been flying domestically for decades. Lachie plans on continuing the family tradition by joining the air force.

Contrary to initial impressions, Sally says flying has been a great career for raising a family. “If anything it’s been easier that a regular nine-to-five job,” she says. “When the boys were younger I was able to schedule my shifts for the weekends when they could go to their father’s [place]. I always had the option of bidding for long-haul flights such as Melbourne-Perth, which enabled me to get my hours up in a reduced number of days.” Now that the boys are more independent, Sally has just switched to flying internationally while Michael flies domestically, opting for the longer shifts to accommodate his passion for golf.

The family bought the two-bedroom cottage in 2012. While Sally says it was “fine for a couple” there was no way it could accommodate a family with lots of friends and a busy life. Fortunately the cottage came with plans for an extension, so they opted to extend upwards. Now Sally and Michael’s space is upstairs with a balcony overlooking the rear lane, while the boys have their area downstairs. This adjoins the kitchen/dining/living section which opens up to a rear deck and creates a great indoor/outdoor entertaining area.

When it came to furnishing the property, Sally and Michael were greatly assisted by their friend, Bruce Grant, the owner and creator of Watershed Union, a local store that specialises in vintage industrial furniture. “Our children became friends at school,” Sally explains. “It was through Bruce that we met our builder, John O’Brien, who had done a couple of renos for him. We worked closely with both of them to create the space we needed for a busy family life.”

With the propeller as a kick-off point, Watershed Union’s New-York-loft-meets-Hamptons aesthetic was a great match for the home. A consumer goods marketing manager in his former corporate life, Bruce was attracted to the marriage of repurposed industrial artefacts with softer Hamptons-style accessories he saw in his travels in North America. Watershed’s signature piece is a 1920s American factory cart repurposed into a coffee table. The carts are salvaged from disused factories mainly in the American Mid-West and would have originally have been used to move stock parts or furniture on the factory floor. They are typically made from American oak with cast iron wheels and fittings.

All the restoration work is done in the workshop at the back of Watershed Union’s shopfront. The craftsmen also use salvaged Australian hardwoods to make tables with vintage machine, such as lathe, legs. Bruce also imports a range of imported repro furniture inspired by the 19th-century French industrial look. To complete the repertoire, he also stocks soft furnishings such as cushions and throws, which were ideal complements for the rustic metal and timber pieces in Sally and Michael’s interiors. While Sally says the cart coffee table is her absolute favourite piece, the dining table, various lights, an aeronautical wall clock and other statement pieces from Watershed have found their way into her home.

Find out more about this aviation-obsessed family in the May issue of Australian Country magazine, available for order and online now!