Life within one of Australia's oldest homes

Andy and Annie Clifford are the current custodians of a historic property that’s been in their family for more than a century.

Yallum Park’s stately stone homestead and 20 acres [8 hectares] of parkland gardens may resemble an aristocratic English estate, but to Andy and Annie Clifford, it’s just home, a place where every room and everything in it, is made to be used.

“It’s where I grew up, where I climbed trees and fell out of them,” Andy says. “The land has been in my family’s custody for 106 years. Dad was born in the house in 1917, and lived here for all but the last two years of his life. He passed away in 2013 in a nursing home in Penola, which our local town and where I went to school.” 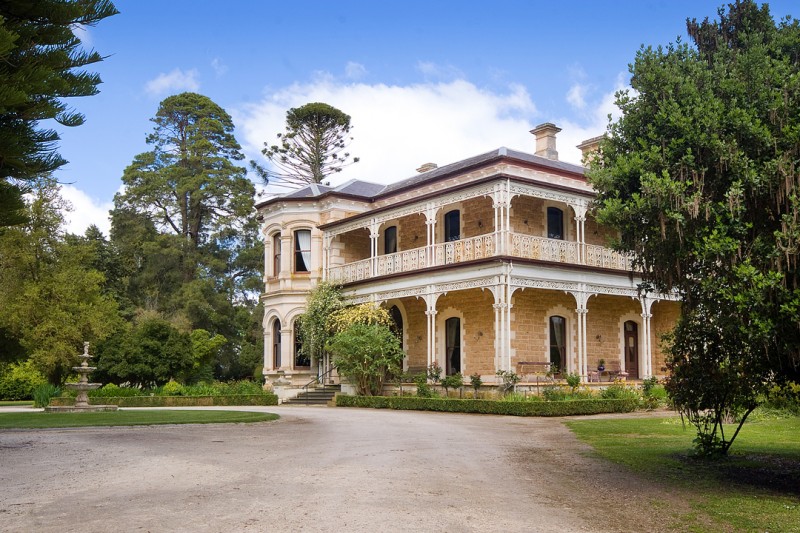 Yallum Park’s history dates back the spread of the squattocracy across South Australia the very beginnings of the wine industry in the Coonawarra region. The first record of European settlement dates back to 1840 when Solomon, Josiah and Thomas Austin squatted on 117 square miles (30,300 hectares) and built a house from stone collected from the paddock. The Somerset farmers had come to Geelong in Victoria via Tasmania and their name lives on in Melbourne’s Austin Hospital. In 1861, the Austins sold to Thomas and Harry Wells, who built a second house, and in turn, sold to Scottish pastoralist and politician John Riddoch in 1863.

Riddoch built a third house on the land, then in 1878 commissioned Melbourne architect Edward Twentyman to design a double-storeyed homestead befitting his standing in society. No expense was spared, with the stonework costing £17,000, slate roof tiles imported from Wales, 11 Italian marble fireplaces and several bronze gasoliers, hoop pine doors and red cedar skirtings and architraves. When the house was decorated gold leaf costing £500 added finishing touches to interiors lined with English wallpapers. In the stairwell and hallway, the wallpaper was painted with goose feathers, treated with albumin and cut into blocks to look like marble. The Riddoch residence was completed in 1880, the year before they entertained Queen Victoria’s sons, Princes George and Albert (later King Edward VII) for an overnight stay.

The first Riddoch homestead garden containing many rare and exotic trees was expanded by a further eight acres with the new building and head gardener John Warner sourced trees and shrubs from all over the world and commanded a team of six gardeners to carry out the maintenance. John Riddoch went on to diversify beyond sheep to establish the Penola Fruit Growing Colony, which later became Coonawarra, plant grapes for wine production, establish the region’s first winery and build the stone cellars that still function today and grace the distinctive label on Wynns Coonawarra Estate bottles.

In 1914, Andy’s grandparents, William and Lucy Clifford bought Yallum Park from John Riddoch’s estate and Andy’s parents, Glen and Gayee took over in 1967.

“The house at that stage was effectively two apartments as it was shared by my parents and grandparents,” Andy explains. “Mum used to say Nana thought she’d gained a maid when she married Dad. So when Nana passed away and my parents offered us to move in, we chose to remain in the remodelled shearers’ quarters, where we raised our children, Darren and Kirsty. Until my grandfather went into the nursing home in 2011, my parents had never had a home exclusively to themselves. When we married, we decided not to do too much to the quarters because it was only a temporary home. As it turned out, we lived there for 42 years, and it was a great place to raise a family.”

When Andy and Annie officially took over the baton in 2014, Andy, who confesses to “no patience for sheep” converted the property to beef cattle and now they run Black Angus as well as grow crops included beans, canola, wheat and barley. Land resumptions and subdivisions through the years have reduced Yallum Park to its present 350 hectares.

The Cliffords retain strong connections to the region’s wine industry. Annie was born in Adelaide, but moved to Coonawarra with her family at the age of 10 when her father became the manager of Penfolds Wines. Andy studied at Roseworthy College and, through the years, has taken various off-farm positions and worked at Mildara, Penfolds, Wynns and James Haselgrove.

“It’s a strong, supportive and safe community,” Annie says. “We have many friends in the wine industry and we consider ourselves fortunate to live here.”

Last year Annie “retired” after 32 years as an extra support officer for Mount Gambier’s Tennyson Catholic College, where daughter Kirsty teaches. But before the new school year began, she was back in the job, albeit working from home. “The driving 60 kilometres each way never bothered me,” she says. “But now I appreciate the extra time it gives me in the day.”

Much of that is spent on the garden, which Andy and Annie describe as “two harbour bridges” in terms of its never-ending demands. “Andy calls me ‘parks and gardens’,” Annie says. “I’d add cleaner and duster to that job description. But not cook. That’s his domain. If he’d waited for me to get home most school nights we wouldn’t have eaten till midnight. Plus it gives me extra time in the garden. I find it very relaxing to go out there and just lose track of time.”

The Cliffords say they’ve repaired gates and fences and added 150 trees and shrubs to the open woodland garden during the past six years as well as added numerous garden beds to add colour throughout the year. Fortunately, son Darren is a builder and carpenter and now lives in the shearers’ quarters, so is able to lend a helping hand.