Susan Weil believes in the power of simplicity and these days she is sharing her home and its sub-tropical largesse with visitors from all round the world.

There’s a daybed at Susan Weil’s farmhouse that has travelled with her most of her adult life. She spotted the remodelled Indian bullock cart in a shop in Bellingen on the NSW mid-north coast as a 21-year-old on a road trip with friends. Then she paid what at time was an extravagant amount to buy it and ship it back to her home in Sydney. Whenever she’s moved, the daybed has been the piece of furniture that’s been first on the truck. Now, more than 25 years later, it’s come home to roost on the verandah of her farmhouse in the Bellingen hinterland.

Susan was born in Capetown in South Africa and migrated to Australia with her family as a nine-year-old. She went to school on Sydney’s north shore and chased a professional tennis career for a while before she became a marriage counsellor. “I was living in a beachhouse at Palm Beach when my first daughter was born,” she explains. “My then husband and I had a desire to get out of town, so we bought a shed at Putty in the bush north-west of Sydney. When we weren’t using it, we rented it to like-minded people who also wanted to get away from it all. The deal was that guests would leave it as they found it, or in better condition and it worked amazingly well. This was my first experience providing affordable, community-based accommodation and the place became so popular that we had to hire a manager to maintain it.”

Then the shed burnt down, Susan’s marriage dissolved, and with one-year-old Sahara in tow, she started looking for a more permanent move away from the city. “I went searching for a small, child-focused place that had a good sense of community,” she recalls. “The far north coast was a bit too latte for me, and eventually I hit on Bellingen, which has a long history of people living sustainably, responsibly and supportively.”

No stranger to renovations, the next task was to find a house that she could do up. “I knew I wanted something north-facing, that captured sea breezes and was close to town,” Susan says. “That proved more difficult than I imagined. Eventually the agent brought me out here. The bottom house was a total wreck, the driveway was almost impossible to navigate, there was not a plant in the garden and the studio was a derelict shed. It was just after big floods and it was pissing down rain and it really looked like a dump. But then the sky cleared for a minute and you could see McGraths Hump in the distance and I was sold.

It really was a case of location, location.” Susan gutted the existing house and remodelled it to improve its passive solar performance. Then she asked a builder friend toquote for a new house further up the hill, so she could rent the bottom house as an income stream. But that proved beyond her means, so she found a 1920s farmhouse and had it relocated to the site.

“Basically they cut it in half and pulled it up the hill with a bulldozer,” Susan says. “Then the real work began with me wearing my owner builder’s hat. I extended the farmhouse by adding a barn at the front. It was a brutal build and it took the best part of a year.” Susan bought recycled timber for the floors and ceilings from a Sydney floor broker. Three-hundred-year-old French doors from a local recycling centre were a major splurge, but elsewhere, she economised by upcycling fixtures and fittings and judicious op shop purchases and second-hand finds.

A neighbour had a timber yard, so I was able to buy old beams and boards from him to build the sheds and chook houses,” Susan says. “Then I set to work on the fences and gates and building a garden. As the property covers eight acres [three hectares], it was a massive job, and I don’t think I’d attempt anything similar again. But now that it’s done, it is extremely rewarding to look around and know I made it all happen. Even with such a tight eye on the budget I couldn’t have afforded to do it in Sydney.” The build was completed just in time for Sass’s birth and Susan was then able to rent out the bottom house. Guests enjoy fresh produce from the garden as well as the company of a menagerie of animals including two sheep, two dogs, three horses, 120 chooks and Daisy the cow.

“Sharing food with family and friends has always been important to me,” Susan says. “Since moving here, I’ve become more interested in biodynamics, permaculture and growing food organically. Until recently we sold our produce at an organic market, but that has closed now, so local restaurants are my main outlet now. Plus we sell our eggs at the local supermarket and providore. Our orchard produces lots of citrus including oranges, mandarins, lemonade fruit and limes as well as mangoes, Davidson plums, lychees, olives, figs, Brazilian cherries, guavas, custard apples, papayas, and three varieties of bananas. The garden gives us snake beans, green beans, garlic, capsicum and tomatoes. But our main thing is a 15-leaf heritage salad mix, which has proven very popular.”

The desire to get away from it all is never far from Susan’s mind, so when she heard that a rustic hut in the hilly wilderness an hour away at Hernani was for sale, she couldn’t resist the opportunity. She and the girls use this bolthole, which runs on a hybrid of solar power, a slow combustion stove, tank water and a composting toilet, whenever they can escape on holidays, and relish the chance to cook outdoors, explore the surrounding national parks and feast on the fruit that an old orchard provides.
In between times, Susan also rents out this property, which is located right beside the National Bicentennial Horse Trail and provides great riding opportunities for horse lovers. With three houses now at her disposal, she has also decided to offer the farmhouse as another accommodation option. “We just move between the houses as they are rented,” she explains. “The girls are home schooled so it’s easy for us to pack up and move as required. Of course we need to keep up with the chooks and the garden, so we’re never far away if guests need us. We love sharing the place with visitors and they are welcome to help feed the chooks and the animals and collect the eggs. I’ve always believed that you should never overlook the power of simplicity. It’s amazing how many people tell us they are going home to start a vegie garden after staying with us.” 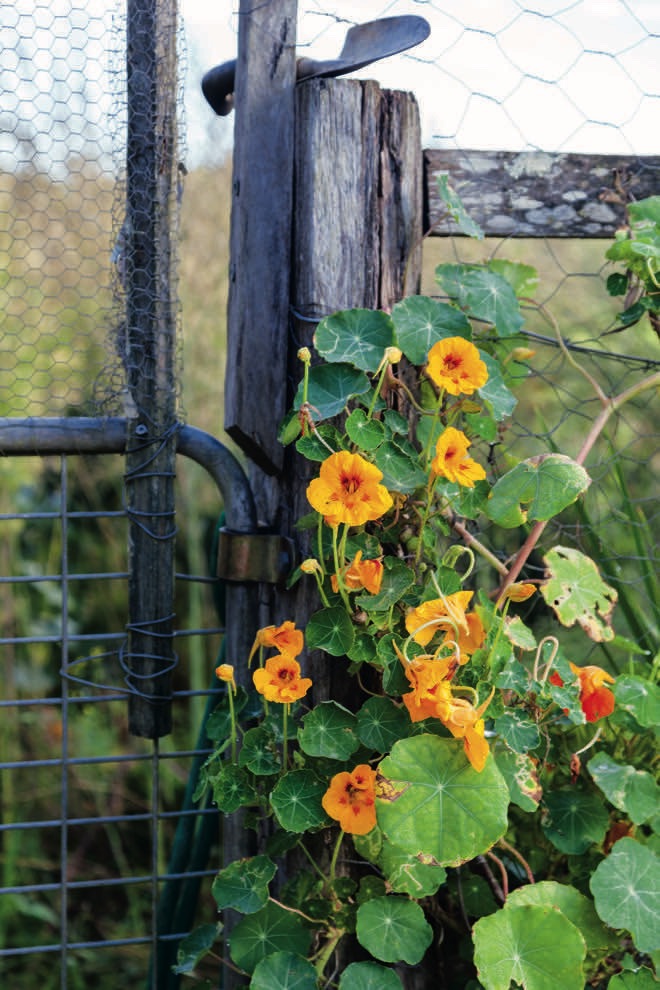 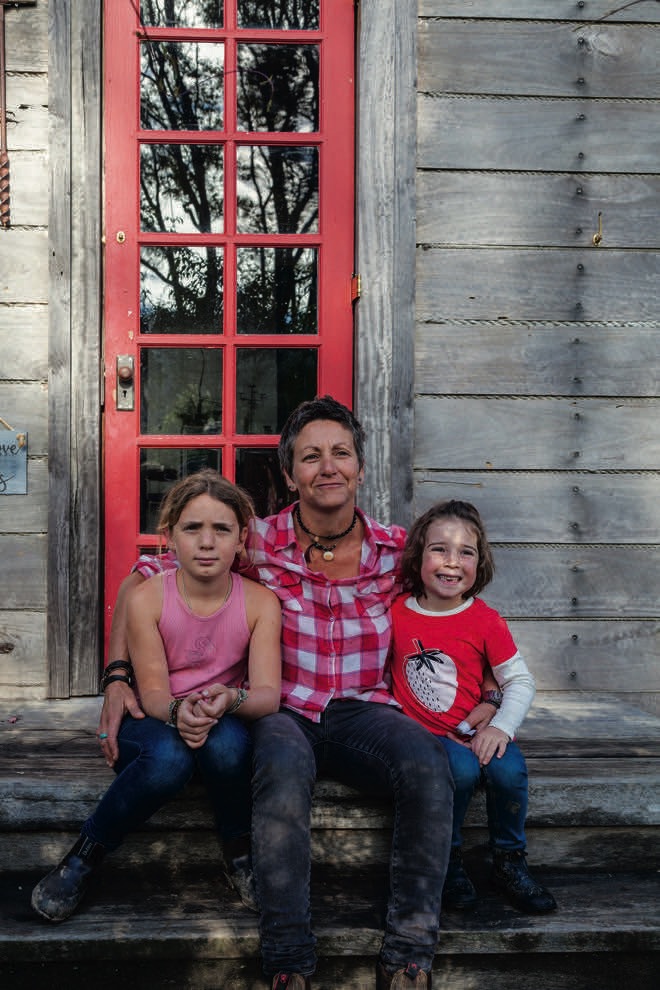 The vintage farmhouse accommodates four adults and two children and the main farmhouse, up to 12 guests. The wilderness hut sleeps nine and guests are also welcome to pitch a tent in the grounds.