Northumberland and Australia mixed for a contemporary farmhouse home 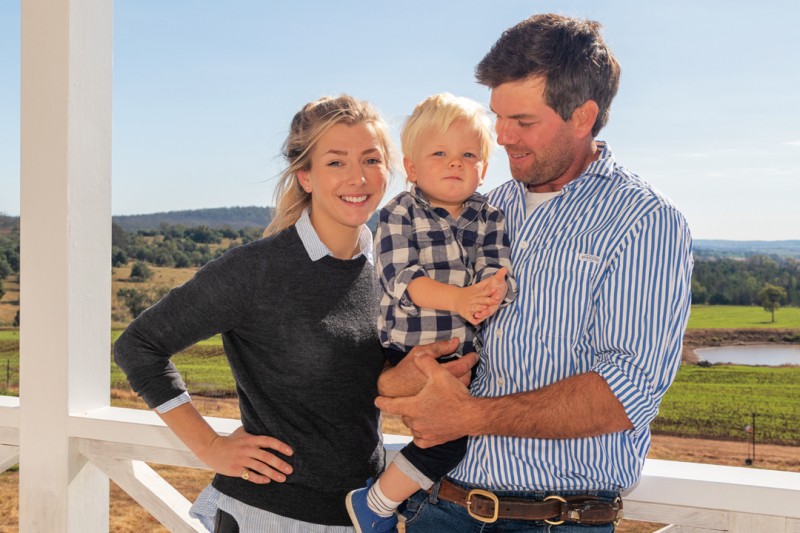 As Emma Rose Munsie looks out from the homestead at Fair View, the NSW farm where she lives with her husband, Sam, and their toddler, Digby, the contrast with her childhood in Northumberland, northern England couldn’t be more marked. Instead of the closely populated sheep farms of the Cheviot Hills, she’s surrounded by sprawling expanses of native grass and crops where cattle and sheep are fattened. The interior designer, who was accustomed living 10 kilometres from the nearest village, now finds herself roughly an equidistant 100km from Moree to the south or Goondiwindi to the north just over the Queensland border.

“The only thing my two lives have in common is I lived on a farm,” Emma Rose observes. “I always knew I would come to Australia, because both my parents had travelled here and loved it, but I never imagined that I would end up marrying and living in the bush.”

Like many young travellers, Emma Rose was lured to the region by the promise of a visa extension for rural service. A family connection suggested she make contact with a friend in Moree who might be able to offer her work and … the rest is history.

“I actually misheard and thought they lived at Taree [on the NSW mid-north coast],” Emma Rose says. “I imagined I’d be heading back to Sydney every weekend. Instead, I ended up in the bush seven hours drive away. I met Sam at a polo match and I have to say first impressions don’t always count. He was a bit the worse for wear and he was growing a beard for a charity. My initial reaction was that he looked like Ned Kelly. If I’d given the matter any thought, I probably imagined I might have a fling with a cowboy and go back to my job in London.”

As it turned out, Sam proved to be a cut above the average bushranger. He’s part of the wonderfully adaptable and energetic Munsie family, who live on adjoining Willinga north of Warialda. With his parents, Jaime and Binna, siblings and their partners he helps run the two stations and a number of side enterprises. He’s a natural athlete and pursued a football career before studying at MarcusOldhamCollege in Geelong and returning to the land that has been in the Munsie family since his great-grandfather moved there from Sydney in 1897.

The couple’s two worlds collided in 2016, when they married in the UK and 48 Aussies made the trek to see them tie the knot. “Interestingly Australian and Northumbrian cultures are quite similar,” Emma Rose explains. “Country people, wherever they are, speak a common language. All our guests were billeted to family friends, so by the end of the wedding, they were all bonded like a big family. Some of them have visited independent of us, since the wedding.”

When Sam and Emma Rose moved to Fair View after they returned, they inherited a true fixer-upper in the farmhouse, which had started life as a worker’s cottage and been added to through the years. Fortunately, Sam inherited his father’s practical streak and facility for making things and has been able to do a lot of the renovation work himself. “Sam also learned a lot from his friend Matthew Bell, who has a construction business in Goondiwindi,” Emma Rose says. “Out here you have to be resourceful because we’re too far from the city for professional services. It helps that we share an artistic streak and pretty much anything I can dream up, Sam is able to build.”

Initially Emma Rose took a job with a grain broker in Goondiwindi, but these days she’s busy looking after Digby, who is two, restoring the house and reviving her interior design business.

“An unexpected benefit of doing up our own home has been that others have asked me to help with their projects,” she says. “I also helped Binna style the Faraway Dome accommodation on Willinga and gradually I’m building ERL Interior Design by word of mouth.”

Emma Rose (or ER as she’s affectionately dubbed) says she aims to help her clients find their own style. “I don’t want to be the author of their stories,” she says. “I want them to feel they’ve done it themselves with a bit of guidance from me. If they feel ownership of the outcome then I’ve done my job properly.”

One of ER’s many guiding principles is “if you love a piece, buy it and make it work”. “Whether it’s art, sculpture, furniture or plants, everything you collect is your story,” she says. “The other important thing to remember is to be bold. If you feel a connection, go for it. Nothing is irreparable and paint is cheap.”

Sam and ER have extended their living areas by adding a large deck and wraparound verandahs. They’ve created an open kitchen, dining and living space and have also renovated the bedrooms and bathroom. The garden is a work in progress and the recent addition of a chicken house is a step in the direction of kitchen garden self sufficiency. “It’s a work in progress,” Emma Rose says. “We used bricks from the original homestead for paving and there will always be something we can tweak. But right now, I’m just grateful, even with the challenges of COVID and the separation from my family in the UK, that we live in such a beautiful spot. Goondiwindi is a great community and I’ve made many friends here. I just feel incredibly fortunate to have found my way here and to have landed in an extended family that I can count as friends as well as relatives.”