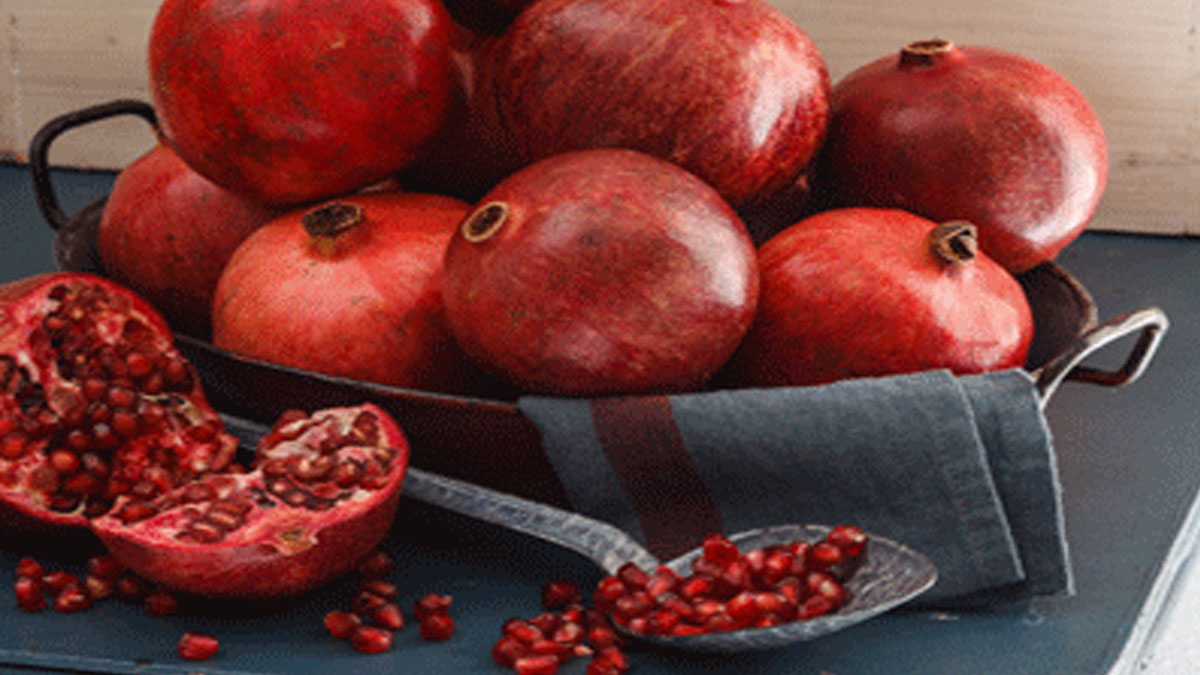 The pomegranate has held its place in art, literature, food and medicine for centuries.

Native to Persia, it is mentioned in the Old Testament of the Bible, was used by Egyptians as a precious item of sustenance for the afterlife, features in Greek and Roman mythology and the Koran describes it as the fruit of paradise. Its medicinal benefits are recognised in India and Morocco, and the often long-living people of Georgia and Azerbaijan are known to consume significant quantities of the fruit, or false berry. Scientifically, the pomegranate is known to contain significant quantities of antioxidants, vitamin C, potassium and iron, supporting its ancient reputation as a miracle food. Since 2008, a significant crop has been grown in Victoria’s Goulburn Valley. Pomegranates are often regarded by the home cook as too hard or messy to use. However, there is a simple method for extracting the seeds. Simply cut the fruit in half around the equator. One knife cut is enough; more will leave more seeds damaged. Each of the segments of seeds nestles in a creamy protective pith, which must be discarded. Gently peel off one small section of the tough outer skin, then section by section turn out the seeds, flicking them off with your thumb. It is wise to do this over a container positioned in the sink, to contain renegade seeds and juice splatters. Each pomegranate yields on average one cup of seeds. As well as the fresh fruit, pomegranate molasses and paste are available, particularly from Middle Eastern suppliers but also increasingly in supermarkets. Pomegranate molasses is particularly good blended with ice, lime and dry ginger ale as a refreshing non-alcoholic drink. Both the paste and molasses make great additions to marinades, imparting a tangy sweetness. Use both in moderation to avoid a burnt crust.

Selection and Storage: Australian pomegranates are available in shops between April and August, and supplies are supplemented by imports from the USA, particularly between October and February. More recently, the seeds, or arils, have also been marketed in packets. Uncut pomegranates have a shelf life of at least a month, and refrigerated will keep well for two to three months. This, of course, depends of the age of the fruit at purchase. Frozen, the seeds will keep for months and retain their original character when thawed.

Combine marinade ingredients in food processor and work to a paste. Line a baking dish large enough to accommodate the lamb shoulder with foil, allowing enough overhang to wrap the lamb. Line foil with baking paper of the same size. Spoon half the marinade mixture into the base of the dish, place lamb, fat side down, on top. Spread remaining marinade over lamb, then wrap securely in the paper and then the foil. The lamb can be refrigerated for 1-2 days at this stage if required, and brought to room temperature again before cooking. Preheat the oven to 150˚C. Cook lamb for 6-7 hours. (I cooked it overnight and left it in the turned-off oven until lunch.) Roast the walnuts until crisp.

Place the tomato halves and chillies on a baking paper-lined tray and roast until semi-dry, 1½ to 2 hours in a 150˚C oven.
To serve, place a bed of rocket on a serving platter. Unwrap the lamb and pull it apart with your hands. Place on rocket, then top with tomatoes, chillies, feta and some of the oil, pomegranate seeds, coriander and mint. Serve immediately.

Spread both sides of each steak with pomegranate paste. Cover and set aside until required. (Can be refrigerated for 1-2 days — bring to room temperature before grilling.) Preheat oven to 200˚C. Line one large or two small baking trays with baking paper. Spread pumpkin, cauliflower, chilli and garlic head on tray(s). Sprinkle with olive oil and turn to coat. Sprinkle with zaatar. Roast in preheated oven for 50-60 minutes, until tender and beginning to brown. While vegetables are cooking, heat a cast-iron ribbed grill pan or barbecue to high. Brush surface lightly with oil then cook steaks for 4 minutes on each side. Remove and wrap in foil to rest for at least 10 minutes, or until vegetables are ready. Combine dressing ingredients in a small bowl. Cut steaks into thick fingers and serve with vegetables, watercress, labna, yoghurt dressing and sprinkle with pomegranate seeds.

Have the cutlets at room temperature. Combine the sumac, pomegranate paste and olive oil in a small bowl. Spread onto both sides of each cutlet (this can be done in advance and the cutlets refrigerated until required — bring to room temperature before cooking). Heat a cast-iron ribbed grill pan or barbecue and cook cutlets, about two minutes on each side. The pomegranate paste will blacken quickly, so discard any loose charred bits. Serve on a bed of flat-leaf parsley leaves mixed with oil from the labna (see below).

Heat stock in a saucepan until simmering. Heat oil in a deep, heavy-based pot. Add onion and garlic and stir-fry until soft. Add barley and cumin and cook, stirring, for 2 minutes. Pour in all the stock and the pomegranate molasses and bring to a simmer. Season with salt and pepper to taste, cover and simmer over a low heat for 40-50 minutes, or until most of the liquid is absorbed and the barley is tender. Stir occasionally to prevent sticking. Stir in the kale and cook a further five minutes. Serve in a bowl and scatter with pomegranate seeds and labna, or as an accompaniment to grilled lamb cutlets. 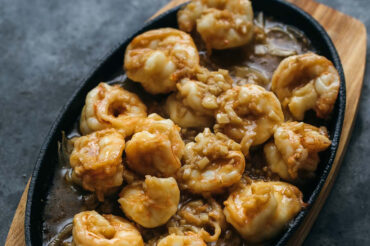 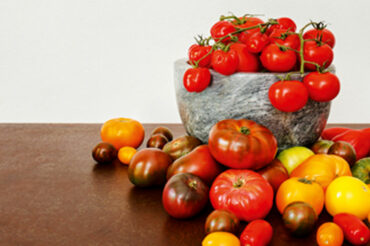 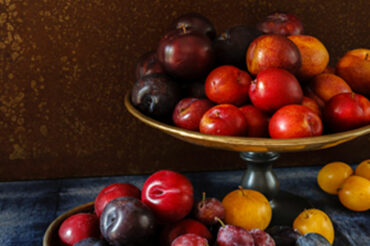 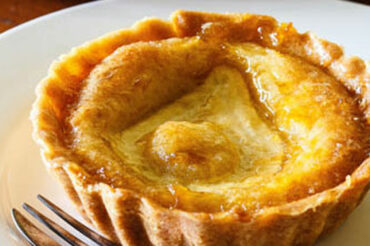