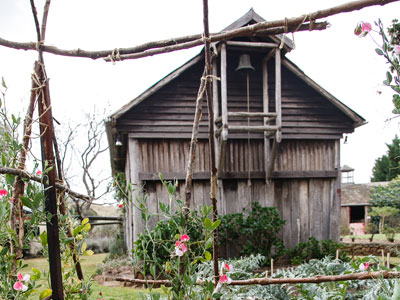 Mickey Robertson would probably hoot with laughter at being called a domestic goddess but on hearing her philosophy on household duties the phrase keeps coming to mind. Take laundry for example. “We all have to do it,” she says in her pragmatic way. “So we might as well embrace it. I make doing the washing a joyous event. There are no plastic baskets or utilitarian pegs in my laundry. I have beautiful cane baskets and lovely wooden pegs. I keep in mind the unbeatable smell of sun-dried washing, which makes the chore worthwhile. And then I iron with lovely linen water so everything smells fresh and fragrant when you use it.”

Always a glass-half-full kind of person, Mickey has applied this philiosophy to the restoration of the home she shares with her leadership advisor husband, Larry, and their daughters Bonnie, 16, and Clementine, 22. They came across the 28-acre property in the foothills of the Razorback Range near Camden on Sydney’s south-western perimeter in 1988, when they were looking for a potential site for English friends to develop a conference centre.

“Even the real estate person told Larry he didn’t want to look at the place as it wouldn’t be suitable,” Mickey says. “But we inspected, fell in love with the 1840s sandstone cottage and that was it. The beginning of the beginning. Or perhaps the beginning of the end, because we have been working on it ever since.”

The land on which Glenmore House stands was part of an 1834 grant made to Hannibal Macarthur, pastoralist, politician and nephew of Merino industry pioneers, John and Elizabeth Macarthur. The estate was later subdivided and sold to various members of the Moore family, who continue to have a presence in the district to the present day. 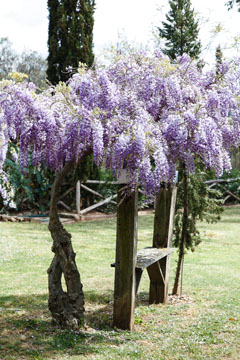 Glenmore House came with a collection of dilapidated early colonial outbuildings, so as well as restoring and extending the cottage, Mickey and Larry have progressively given new life to the former cowshed, dairy, stables, hay shed, barn and store room. Step by step during the past 25 years [eds it will be when this comes out] they have linked the buildings together with new fences, drystone walls, paths, steps, hedges and gardens.

“In the early days it was just mad,” Mickey recalls. “I was still working in Sydney, so we’d come down on weekends and work on making the house habitable and clearing the grounds. After about a year, we could finally stay overnight. Then it became our weekender and finally 17 years ago, we moved down her permanently, though of course we both still go to the city for work.”

The property now supports a small herd of red Angus cattle and ever resourceful, Mickey has set about making the buildings support themselves by turning them into a kitchen garden school.

“Although I was raised between a flat in inner Sydney and a boat on the harbour, as a child my imaginary home was something out of Beatrix Potter,” Mickey explains. “I’ve always loved gardens and garden plans, so was delighted at the opportunity to create a real vegie garden when we moved down here. Predictably enough, though, I stuffed up my first attempt. It was then that I realised you actually need to learn how to make a garden work. And then I set about finding someone to show me how to do it. I practically scoured the entire Sydney basin trying to find someone similar to Sarah Raven [the English writer, broadcaster and expert on all things to grow, cut and eat from the garden]. Finally I met Linda Ross, who has qualifications in landscape architecture and horticulture and is passionate about growing her own organic vegies. So five years ago we started kitchen garden classes, which actually take people through what needs to happen in the garden month by month. So this month it might be all about harvesting this season’s crops and preparing the soil and next month it might be about planting the garden and showing them how to build tunnels and wigwams and triangle trellises for tomatoes.” 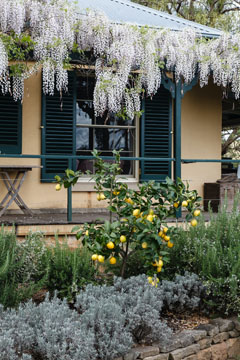 Along the way Mickey’s own kitchen garden has become an object lesson in sustainability, with beds set out to demonstrate rotation cropping (to keep the soil healthy), companion planting (of complimentary plants for shade or pest control purposes) and secession planting (which allows two crops which produce at different times to grow in the one row). In between there are various shelters housing chooks, which are “let out to do their job of scratching the soil” at appropriate times.

“I’ve got a bit of an obsession with rows,” Mickey observes. “But I’ve had to let go of that to embrace guild planting, which basically aims to increase the productivity of a garden by integrating the components, be they plants, animals or structures. So I might plant spring onions, calendula and fennel together in a higgledy piggledy fashion to confuse the pests, which generally are specific to one plant and move down the bed from one to the next. Amazingly enough it works.”

As part of the kitchen garden experience Mickey started “spoiling the guests” by serving treats based on whatever was really new in the garden, whether it was peas fresh from the vine, new season’s asparagus, or baby artichokes. “I’m just a home cook, but having a kitchen garden teaches you to cook, because it forces you to use what you have to hand,” she says. “The kitchen garden people started asking me how I’d made things, so I thought I might as well start cooking classes as well. Because when you have a productive garden you’ll often have a glut, so it’s great to be able to make jams, preserves, and chutneys to make the most of the surplus. We’ve had soup days, cake days, marmalade days.”

Mickey also supplements the cooking class calendar with classes by visiting chefs, who demonstrate how to make the most of what in the garden. She is also looking at expanding the curriculum with art and craft workshops.

“I’ve always loved domestic life,” she says. “That’s why I love decorating, cooking and beautiful gardens. I’m just incredibly lucky that Glenmore House has allowed me to bring all that together and turn it into a business and lifestyle.”

For more information on the kitchen garden and cooking classes visit “www.glenmorehouse.com.au”