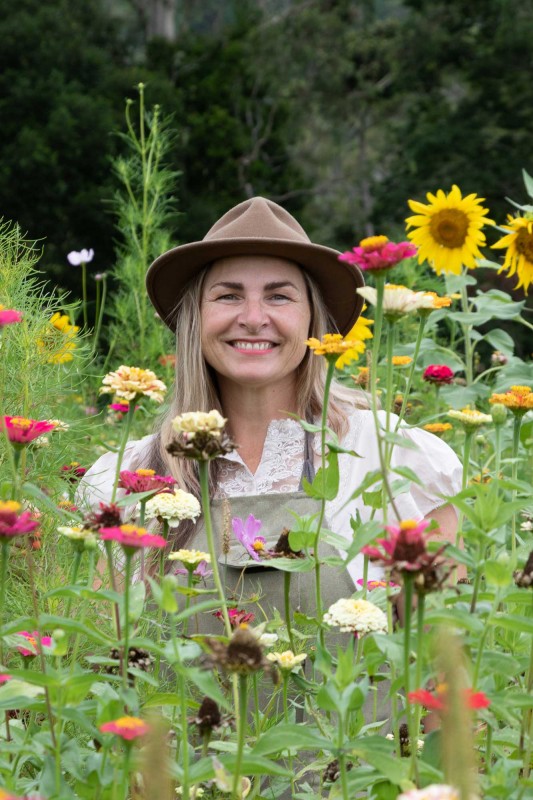 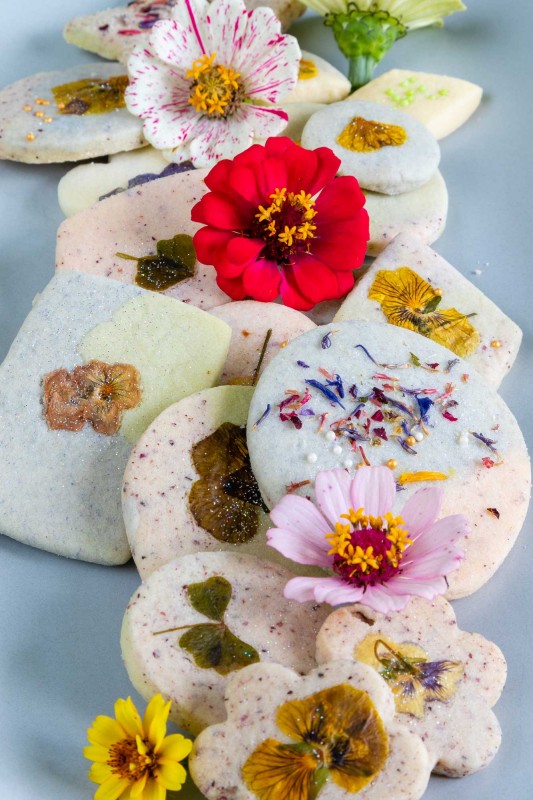 They say there’s a fine line between passion and insanity. By her own account, Simone Jelley has been teetering on the border between the two for the past six years.

Simone and her husband, Dave, live near the village of Canungra in the fertile folds of Queensland’s Scenic Rim. Pretty Produce, their edible flower farm, sits on the floodplain of Canungra Creek in the foothills of Mount Tamborine and the McPherson Range. While Rob, a mineral sands geologist, travels the country for work, Simone has created paradise for butterflies and bees in a former horse paddock, where she grows a kaleidoscope of flowers and sells them fresh and dried to restaurants and cafes as well as hosting cooking classes and other events that combine creative endeavours in her spectacular garden setting.

Simone grew up in the NSW Blue Mountains, but travelled all over the countryside as her father followed work. She spent time in the Western Australian goldfields where her father took jobs as a miner and then ran stations on the desert fringes.

“It’s Dad that I credit with the genesis of my interest in edible plants,” Simone says. “He was a self-taught man, but he did lot of research into soluble proteins in native pastures.” The bright lights of Sydney beckoned and Simone headed back east to East Sydney Institute of Technology where she studied and later taught photography. But it was a stint in the UK from 2002 to 2006 that proved the epiphany. “I’d always been a foodie and loved cooking, but suddenly I was hearing about this whole new movement spearheaded by Hugh Fearnley-Wittingstall’s farm-to-fork philosophy, Rick Stein emphasising the importance of fresh, local and sustainable seafood and Jamie Oliver championing organic, healthy food and ethical farming. I was swept up by the romance of foraging for wild produce and sourcing everything locally by looking to the landscape as the providore. Those people showed me to be fearless and I guess I developed a ‘fortune  favours the brave’ approach.” 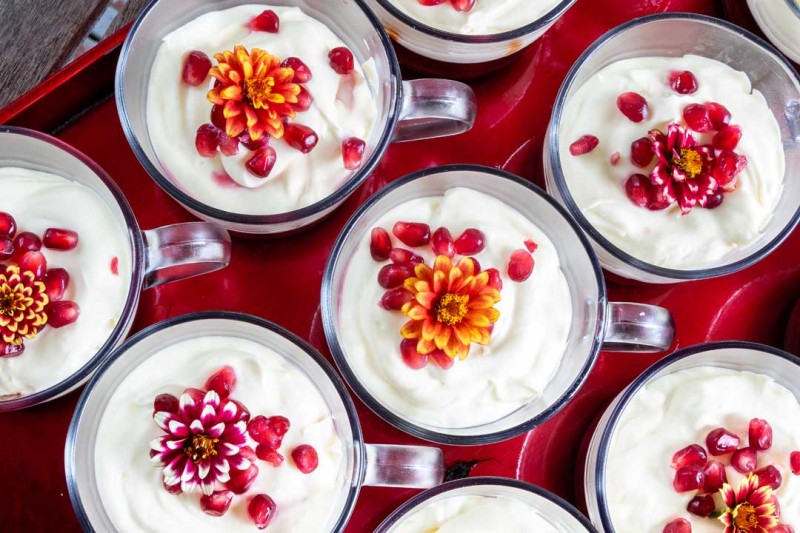 Simone returned to Australia and gravitated to Queensland where she worked in advertising and met Dave, who was building a house on Macleay Island in Moreton Bay. “We married in 2012 and it fell to me to establish what was really my first adult vegie garden,” Simone recalls. “I soon became bored with that and started investigating what I thought were weeds. It turned out that one of the plants I was busy pulling out was gotu kola, a member of the parsley family and one of the cornerstone herbs of Ayurvedic medicine. So then I started investigating other so-called weeds and in a short time, I had identified 10 edible plants that were too good to waste. That sent me down a huge rabbit hole of unrecognised and therapeutic edible plants.” It wasn’t too much of a stretch to move from there to edible flowers, and before long, Simone had a farm leased on nearby Lamb Island and had a growing list of Brisbane chefs and hatted restaurants lining up for her boxes of unusual leaf mixes and flowers for cake decoration, cocktails and edible garnishes. Accolades from Delicious magazine in the form of produce awards followed and Simone recalls feeling they were in the right place at the right time in terms of being in the thick of a regional, organic and sustainable movement.

“But then we wanted to move back to the mainland,” she says. “So we went searching for a place that would be a good fit in terms of a spiritual home for the business.” They found what they were looking for in picturesque Canungra, historically a timber-milling town, but now a charming service town for the surrounding farms and nearby military training facility. The village, population 1200-odd, is a popular weekend getaway known for its equine facilities, a small, but growing wine industry, farmstays and B&Bs. “So that’s how across four days at the end of 2019 we came to migrate our farm and family off the islands via barge with seven trucks and three utes,” Simone recalls. “We arrived at the end of a very dry period and there were bushfires swirling all around us, but from the outset it felt very right. There was no time to dally as I had to start preparing beds for the planting season and establishing the gardens immediately. The bulk of the farm work falls to me as Dave is not a gardener or a flower farmer and he’s away with work a lot of the time. He’s a capable, loving husband who is an enabler of dreams, but I’m sure even he thought I would run out of steam after five years.” 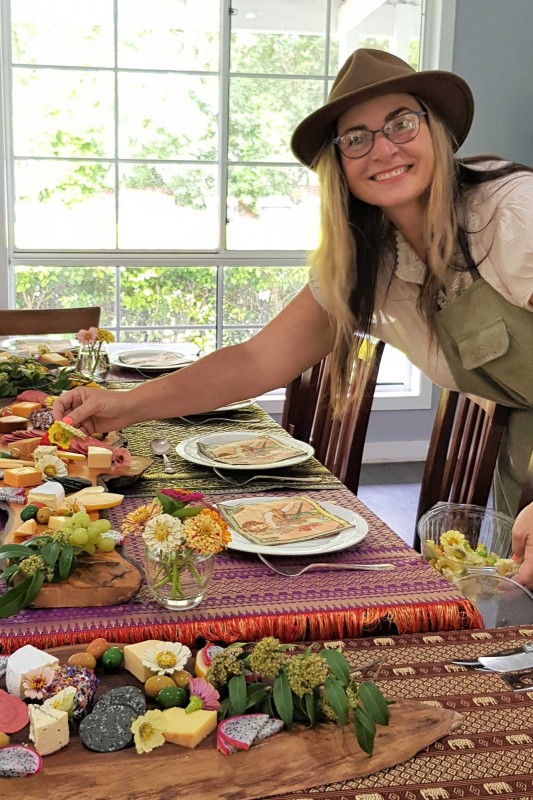 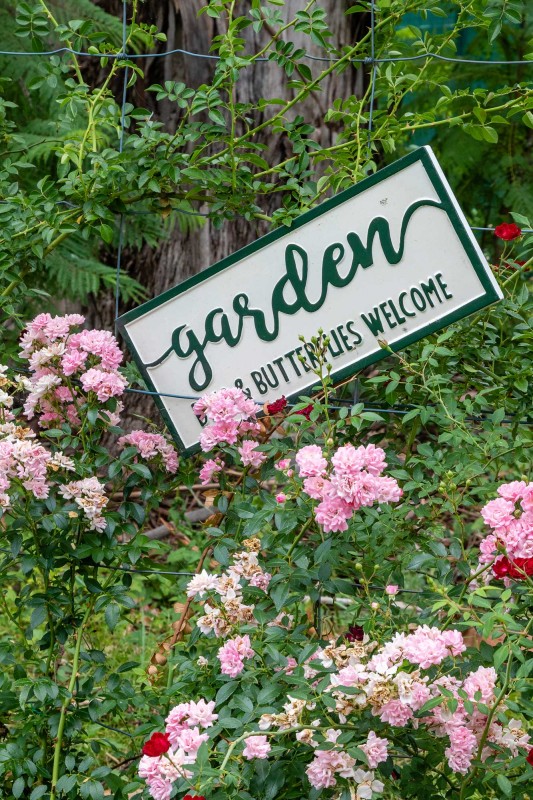 Nothing could be further from the truth. When Australian  Country visited the Pretty Produce farm in late  Summer, the beds were brimming with cosmos, sunflowers,  innias and Simone was flat chat in the kitchen preparing for a  cooking class team-building event featuring flowers picked from the garden. In winter, those beds are transformed with violas, pansies, cornflowers, daisies, calendulas, hollyhocks, snapdragons and forget me nots … in all, there are about 80 different edible flowers. Simone sells them fresh and dried via her website and agents and at local markets and eateries including the highly recommended OWL (Organics With Love) Cafe in the village.

“I’m always open to possibility,” she says. “I’m looking at ways to share the farm with a broader audience, perhaps by hosting art, music and photography workshops as well as cooking schools. In an age where everyone is so consumed by technology, we all need some digital detox. And believe me, there’s no better place to do that  than in our garden surrounded by all the beauty Mother Nature can dream up.” AC. 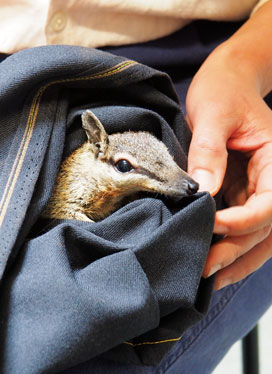 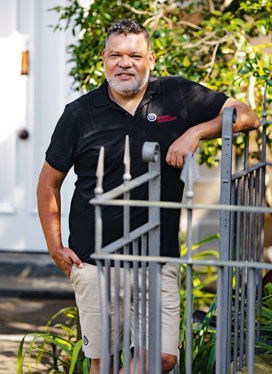