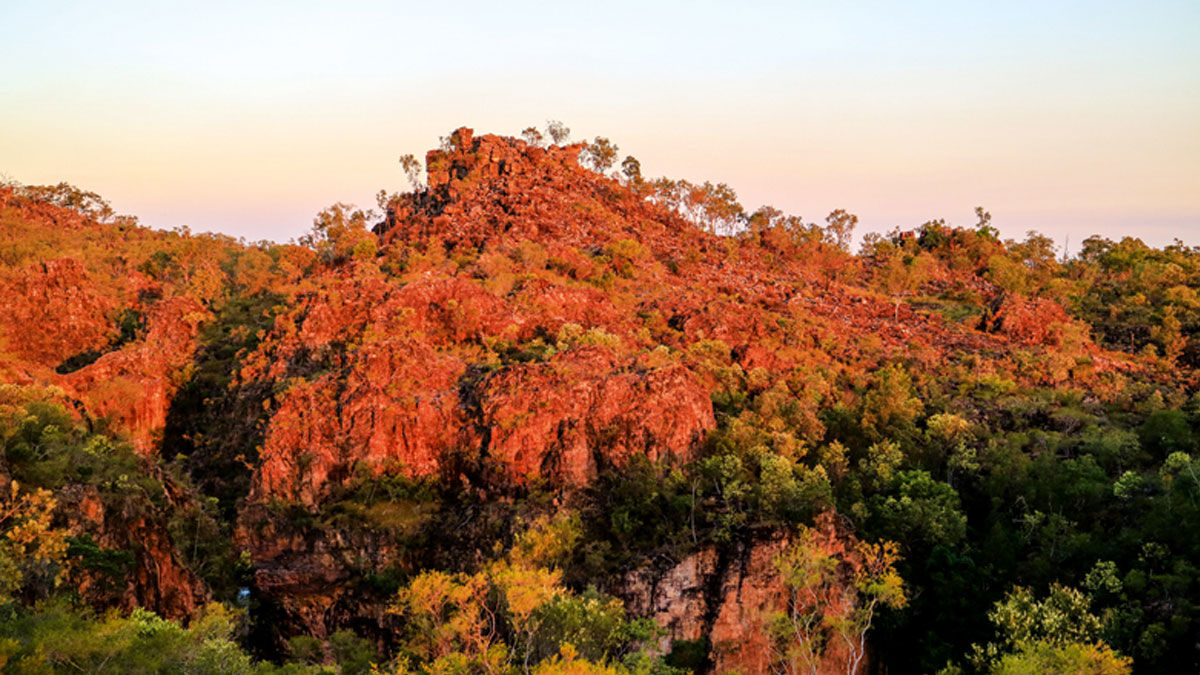 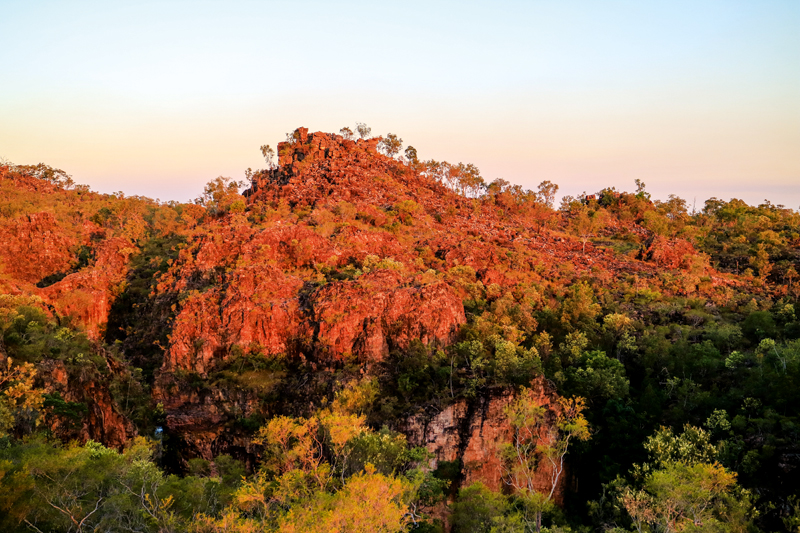 First-time visitors to Darwin, the Northern Territory’s capital, can be forgiven for thinking they’ve fluked the best night of the year. The Mindil Beach Night Markets are a magnet for tourists and locals during the dry season (April to October) and on Thursdays and Sundays, crowds gather on the beach to watch the sun sink spectacularly into Fannie Bay. Repeat visits, however, confirm that the sun and sea perform their splendid duet practically every night. After the show, patrons head to the food stalls to sample everything from croc and kangaroo burgers from the roadkill stall to sizzling Indonesian satays, Thai, Vietnamese, Greek, Italian, Mexican, Chinese and many more offerings. 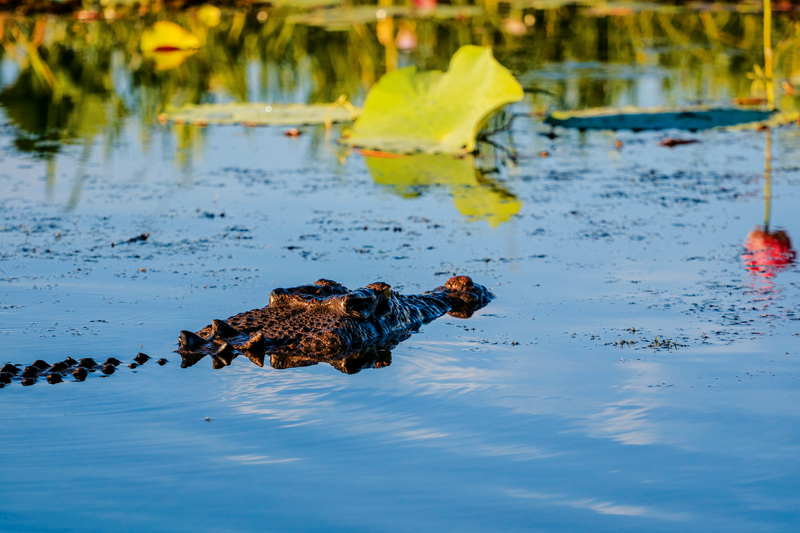 At other times of year, the various waterside clubs provide similar sunset vantage points and cold beverages and counter meals are traditional offerings at the palm-fringed beer gardens of the Trailer Boat Club, the Ski Boat Club and the Sailing Club. Closer to Jakarta than it is to Canberra, and strongly influenced by its Asian neighbours, Darwin is, culturally, Australia’s most diverse city, as evidenced by its lively markets and restaurants where a range of cuisines is well represented. The tropical climate and geographical position also give it a laid-back charm that makes the city itself a popular destination. Its immediate surrounds provide an excellent introduction to many of the attractions, including lush tropical gardens, museums, galleries, crocodiles and other teeming animal and birdlife of the Top End — that one third of the Northern Territory that lies, roughly, in the wet tropics with its ecological treasures, ancient escarpments and lush wetlands. 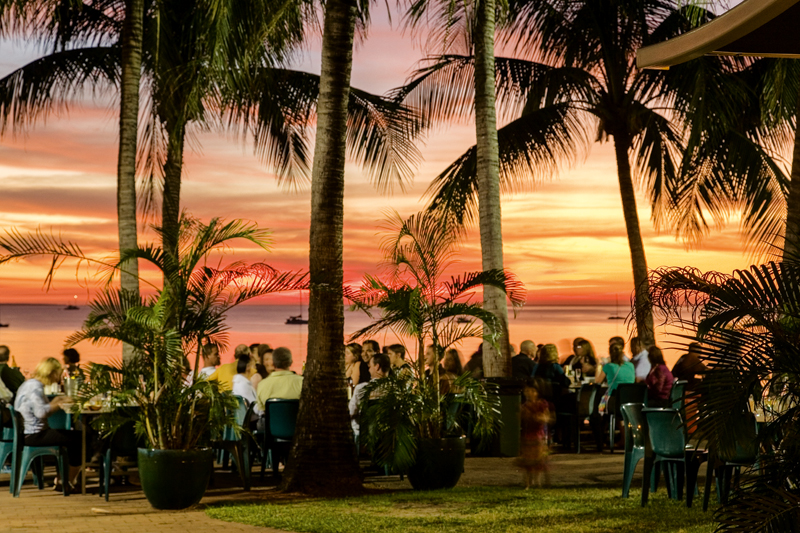 Darwin is also the launching pad for an array of amazing excursions. They include the Tiwi Islands (Bathurst and Melville) in the Timor Sea, which provide a unique insight into the life and culture of the exuberant and hospitable traditional owners. They are renowned for their distinctive art and Pukumani poles, individually carved and decorated poles erected at the graves of loved ones during burial ceremonies that can last for months. 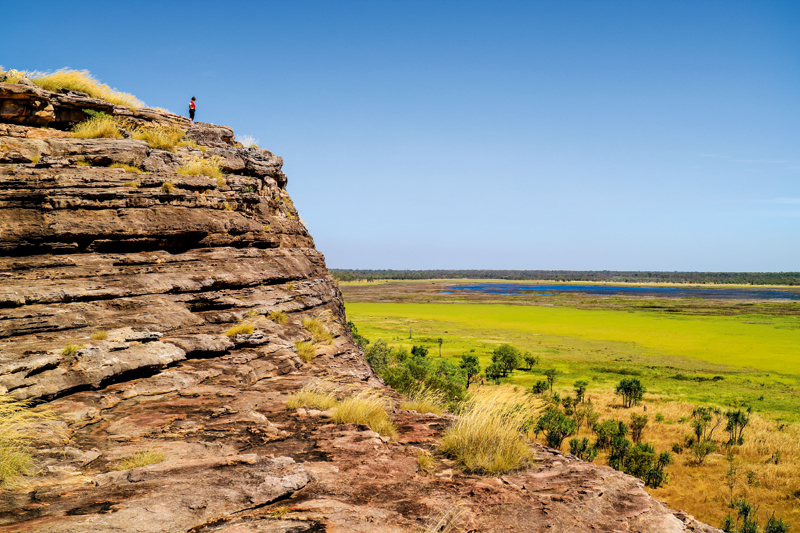 Crocodile mania is hard to avoid in the region and more than 100 salties routinely come out to boats on the Adelaide River, just south of Darwin, where they are encouraged to leap for the cameras by feeding from cruise boat operators. The Daly River/Port Keats Aboriginal Land Trust and Arnhem Land’s Cobourg Peninsula, with its largely untouched coastline and wealth of flora and fauna, are full of allure for those wanting to venture off the beaten track. Access to Arnhem Land is largely restricted to the Gove and Cobourg Peninsulas and the best way to visit is via tour companies that provide transport, accommodation meals and all necessary permits. Cobourg and its waters are home to dugongs, white-bellied sea eagles, black-tipped sharks, rare turtles and giant manta rays while Arnhem Land provides the opportunity to experience Aboriginal art and culture, visit extraordinary ancient rock art sites and fish for barramundi. 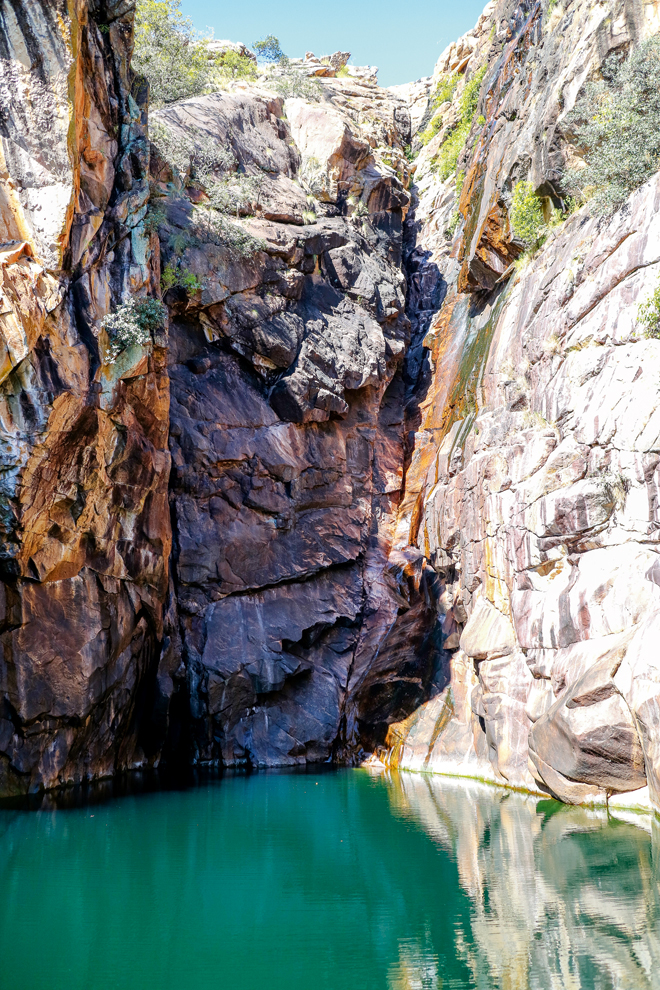 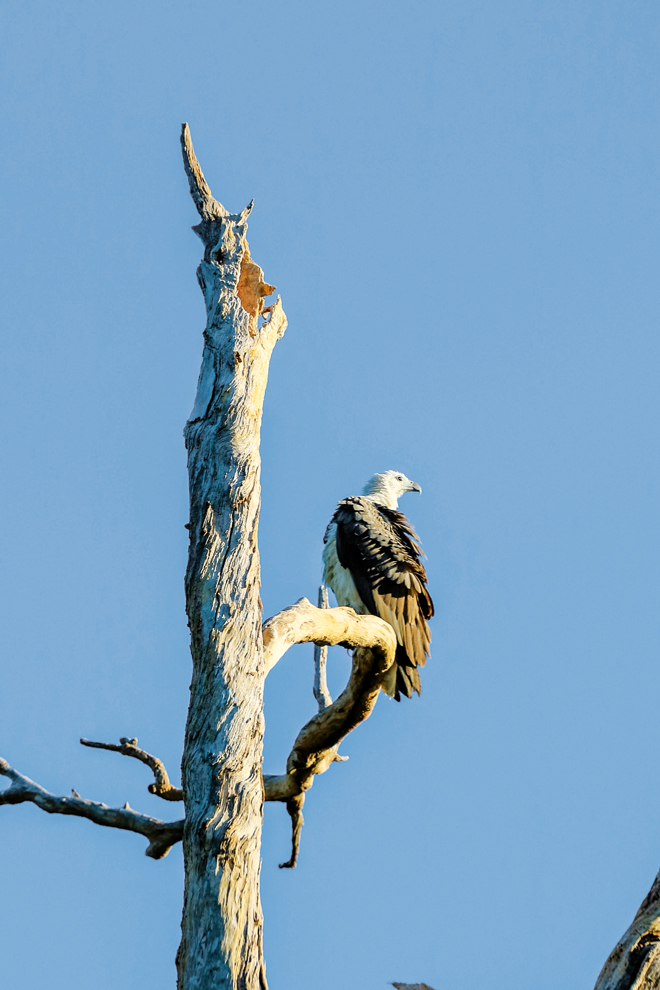 South-east of Darwin are the unspoilt wetlands of the Mary River region and one of Australia’s greatest treasures — World Heritage-listed Kakadu National Park. At 20,000 square kilometres, Kakadu is Australia’s largest national park and, located 150 easy kilometres from Darwin, is the undisputed jewel in the Top End’s crown. It has been placed on the World Heritage list for its outstanding natural and cultural values reflecting the aboriginal people’s long association with the land. The more than 5000 rock art sites in the park are considered perhaps the finest and most extensive collection in the world. Galleries such as Ubirr and Nourlangie Rock are accessible by well-developed paths. Kakadu’s impressive scenery includes towering red escarpments, vast wetlands and extensive woodlands with scattered pockets of rainforest. The prolific birdlife is world famous, particularly towards the end of the dry season when myriad waterbirds gather around the shrunken waterholes. 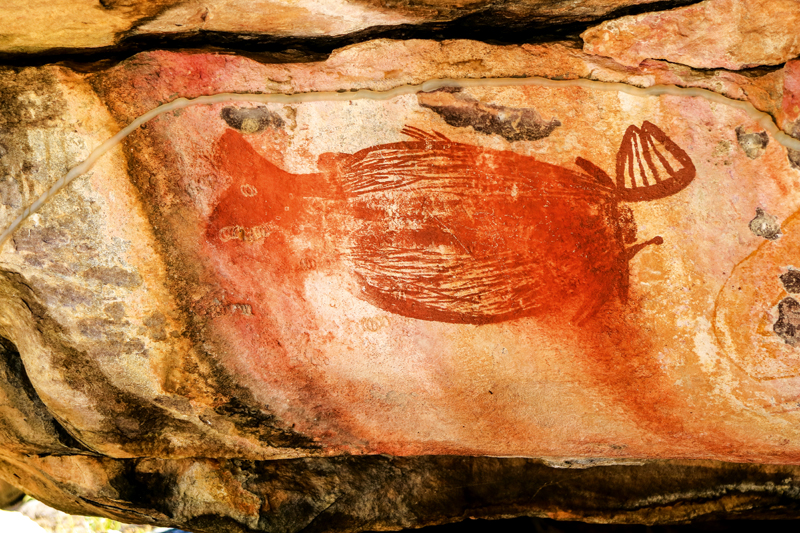 Everything changes in the wet season. As the catchment area for the South Alligator, East Alligator, Katherine, Roper and Daly rivers, Kakadu is shaped by water. From November to May, famous waterfalls including Jim Jim and Twin Falls are at their most spectacular and the lowlands are flooded with water. As the water recedes from these flood plains, billabongs such as Yellow Water at Cooinda and Mamukala at Jabiru are covered in water lilies and attract flocks of waterfowl including magpie geese, whistling ducks, jabirus, brolgas and kingfishers. Learn from the locals and take a cruise with the indigenous-owned Kakadu Tours and Travel. There are facts aplenty to absorb — Rajah shell ducks pair for life; magpie geese hang in threes, one male with two females, who share a nest; you can estimate the length of a croc by multiplying the length of its head by seven … Every time you go, you’ll see something different, but a sunset cruise at the start of the dry season, when smoke from controlled burn-offs burnishes the sky, is hard to beat. If you do take this option, we suggest you take the follow-up offer of a discounted sunrise cruise the next morning, which comes with a buffet breakfast at Cooinda Lodge. 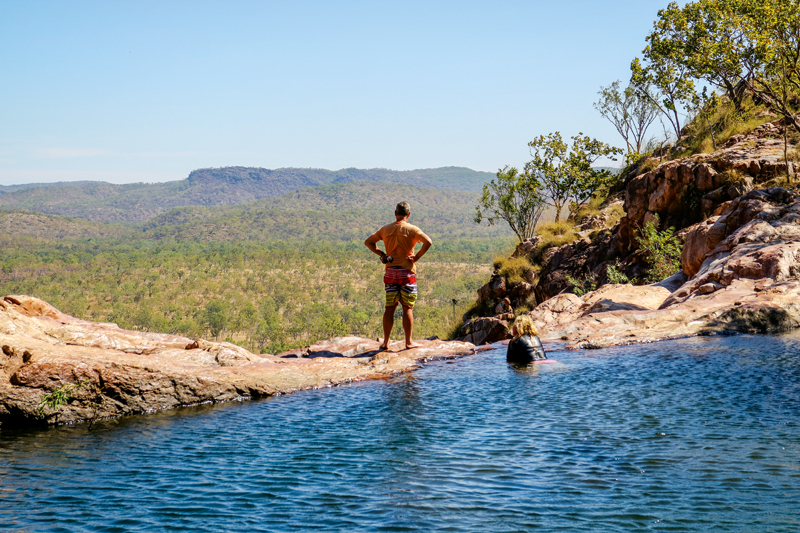 For those who don’t have 4WDs, the company also offers off-the-beaten track tours to the more remote parts of the park, including full-day trips to Jim Jim and Twin Falls and their associated waterholes. If access is limited due to the wet season, there are tours to Ikoymarrwa (Molone) rock pool, and Gunlom Falls in the south of the park. The falls cascade 90 metres to a beautiful rock pool at the base. If you’ve a reasonable level of fitness, take the short, but steep hike to the top for a dip in the pools and spectacular views over the Jawoyn traditional land. 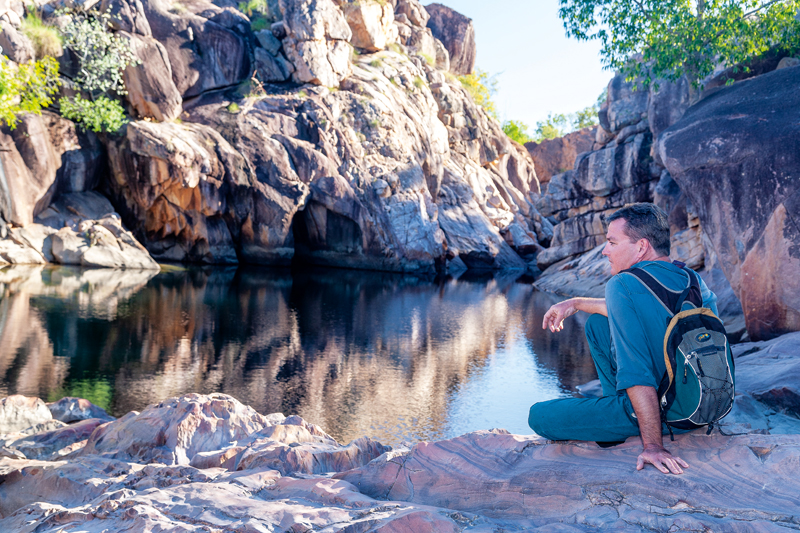 The weathered sandstone escarpments, monsoon rainforest, spectacular waterfalls, historic ruins and huge magnetic termite mounds of Litchfield National Park are other major drawcards just 115km south of Darwin. Many travellers opt to visit Litchfield in a day trip, but those who choose a longer stay will be rewarded with more splendid sunsets and hikes, such as the 3.4-km return trek to Sandy Creek Falls (Tjaynera), which culminates in good, safe swimming in a plunge pool at the base. Other facets of the park are revealed with the Upper and Lower Cascades walks, the 3.2-km hike between Florence Falls and Buley Rockholes, and Wangi Falls, where two waterfalls cascade into a popular swimming hole.

Nitmiluk National Park, about 300km south of Darwin and home to Katherine Gorge, protects another swathe of gorges, rock-art sites and Aboriginal legend and culture. The grassy, bushland campsites at Leliyn (Edith) Falls at the western end of the park are popular with campers. Here, visitors can cool off in the pandanus and palm-tree-lined pool at the base of the falls or take a 2.6-km hike to the pools at the top. Leliyn marks the end point for the 62-km (five- or six-day) Jatbula Trail, which provides a challenging but highly rewarding experience for walkers who are prepared to carry their own camping equipment, food, water and supplies. 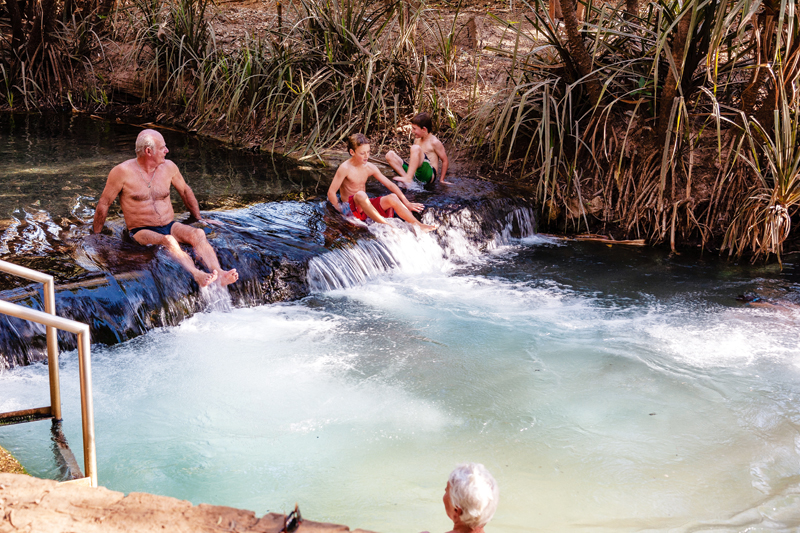 Less hardy souls opt to explore Nitmiluk (Katherine) Gorge, actually 13 gorges carved by the Katherine River over millennia, by boat. Cruises through the first three gorges leave frequently during the dry season, and there are also options to explore further up the gorges by canoe, or gain a bird’s eye view from a helicopter. Apart from breathtaking views, there’s the great big pharmacy of the surrounding bush: the paperbark tree that serves in traditional culture as everything from insect repellent to a precursor to aluminium foil for baking fish in the coals; the fish poison tree absorbs oxygen in the water, temporarily stunning fish so they float to the surface for easy capture. 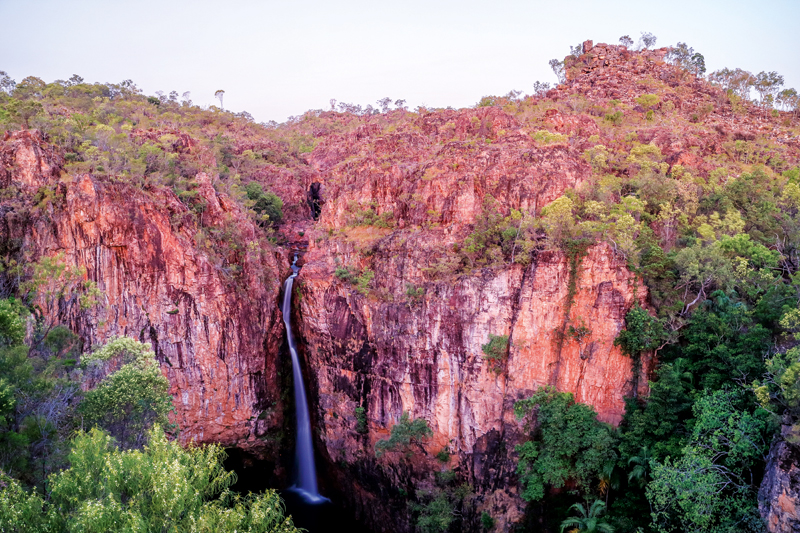 or a more immersive — sometimes literally, if you somewhat counter-intuitively forget to lean into the exposed rocks rather than out — experience on the river, Australian Country joined a Gecko Canoeing & Trekking kayak safari on the river beyond the national park. The company offers three-day and extended tours downstream, far from the crowds in the gorge.

It’s a truly remarkable chance to paddle your own two-person canoe or single kayak into the wilderness. First, there’s the sheer bliss of venturing beyond the land of the mobile phone. Then there’s the delight of paddling no faster than the river’s current carries you, with no stress beyond a short adrenalin rush as you navigate the occasional passage of fast-flowing water — our guide calls them baby rapids. He carries most of the food and equipment including a complete camp kitchen in his big Canadian canoe, while we kayakers have a collapsible chair, a swag and a couple of dry bags for our personal items (sunscreen, jacket for nights, cameras, change of undies) stashed in the front of our canoes. 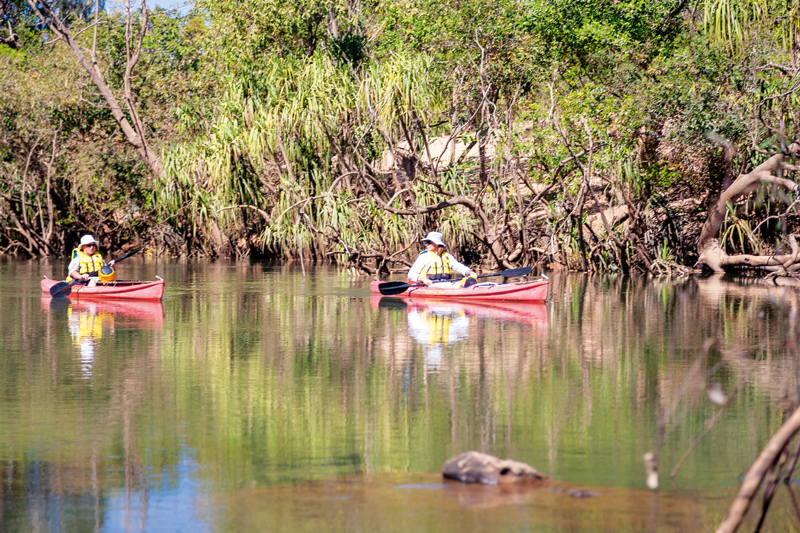 Highlights of the trip included camping on the riverbank and waking to a freshly brewed billy tea, loads of wildlife encounters as birds and animals feed and water on the river’s edge, and not seeing another person (beyond a Parks and Wildlife helicopter that patrols the river to make sure it’s clear of salties). Freshie encounters were commonplace, but we’d be lying if we said we ever became complacent about the splash that heralds these timid creatures leaving their basking posts on the bank and taking cover in the river when our little party glided by. 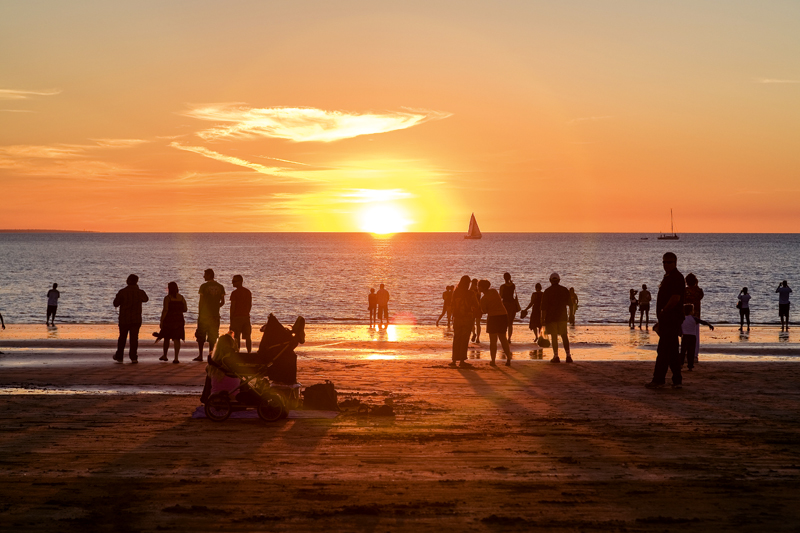 We quickly adapted to going with the flow and absorbing all the extensive knowledge our guide had to share. Kayakers can expect to cover about 20km a day, but there is no pressure to exceed the pace the group finds mutually acceptable. Meals were a delight, as Gecko’s guides are dab hands with the barbecue and camp oven, and proved a great foil for appetites heightened by fresh air and exercise. The end of the tour came too quickly, and we were unanimous that we ended on a high. In a region packed with superlatives, the Top End delivers in spades. From wildlife and waterfalls to ancient wisdom and wow-factor wilderness, it’s living proof that man can never upstage nature.