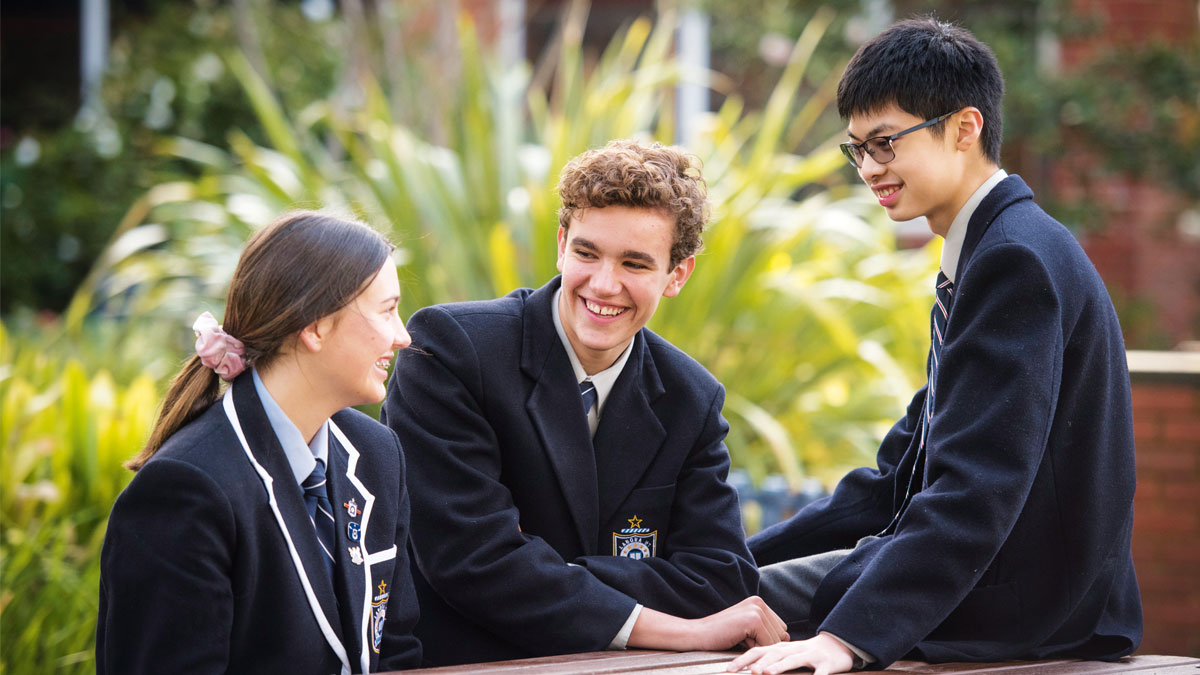 Brought to you by

Students at Melbourne’s Caulfield Grammar have outstanding opportunities to be involved in community and personal-development projects as part of their middle-school years.

It’s a secret of successful fundraising to make the prizes so good that supporters will scramble over each other to win. Caulfield Grammar School’s year 10 student Ed Cunningham was all over this concept when he decided to hold a pink-themed barbecue for breast cancer in the school’s boarding house. To attract the largest possible audience for his event and maximise donations, Ed gained permission to offer the ultimate prize for his boarding school peers — the chance of a weekday sleep-in and two tickets to the movies.

Competition for the prize was so fierce that Ed’s event turned into a sea of pink supporters, with the ultimate prize winner appropriately attired in a pink suit, tie and sequinned trilby.

Caulfield Grammar School is an independent co-educational day and boarding school, with an enrolment of more than 3300 students from early learning to year 12. The school, which was established in 1881, has campuses in the Melbourne suburbs of Caulfield, Malvern and Wheelers Hill as well as a specialist outdoor-education learning facility at Yarra Junction. While the school’s cultural immersion campus in Nanjing, China is on pause until international travel is safe again, a new year nine expedition program to the Northern Territory continues this learning opportunity by allowing students to immerse themselves in the culture and history of local indigenous communities.

As a candidate for the IB (International Baccalaureate) MYP (Middle Years Program), Caulfield Grammar encourages students to develop social responsibility and good citizenship. All year nines are supported to develop a community project to develop understanding of the needs and assets of other communities. Tagged with the catchphrase “me into we”, the students are encouraged by adult mentors to develop a community project and see it through to fruition across a 10-week process. They keep a journal record of the experience and meet regularly with their mentors, who come from the school staff or fields of expertise for each area of interest.

For Ed, who comes from Echuca on the Victorian/NSW border, the pink barbecue was an opportunity to honour the life of a dear family friend who lost her life to breast cancer, raise awareness about the symptoms and raise funds for Breast Cancer Network Australia. At the end of his event, Ed had not only nailed the basics of a successful fundraiser, but he was able to donate $450 to his chosen charity, all provided by guests at his event, which included students and staff from Morcom House, the Caulfield campus boarding facility.

Head of Caulfield Grammar’s Middle School, Danielle Wiggans, explains that students can choose various strands for their community project. They range from fundraisers such as Ed’s to volunteer work and community advocacy. “Their choice of project is very broad,” she says. “It can be informed by the students’ interest in something they have already experienced or simply the desire to learn more
about a particular need or issue.”

Students have needed to be extra agile with their projects since the lockdowns due to the pandemic. “One day student committed to a long-distance swim in his backyard pool,” Danielle says. “Another organised a food bank by setting up a drop-off point in the home driveway and organising non-contact delivery within a five-kilometre radius.”

In response to COVID-enforced library closures, yet another student came up with a mobile book service, delivering donated books to households that registered. “It was such a success that the student decided to turn it into a subscription service to raise funds for an Aboriginal literacy program,” Danielle says. “There is such confidence building in community service, and it’s great to see the students grow as their projects develop.”

For one city student that meant a crash course in the vicissitudes of primary production, when he decided to explore the potential of urban farming by raising chickens in his suburban backyard. Despite his best efforts to keep his livestock safe, one night a fox managed to get in and killed his whole brood. “Even that was an opportunity for growth,” Danielle explains. “Although he was devastated initially, with mentoring, he made changes to his coop and started again.”

Year 12 student and this year’s co-captain of boarding, Charlie Dudley, chose another challenging path when he opted to advocate for greater understanding of farming life. Charlie wanted to share the impact of droughts, floods, isolation and financial hardship through the eyes of farmers in his home district of Deniliquin, in the Riverina district of NSW. He completed his project by recording interviews with a group
of farmers, no mean feat for the then 14-year-old. He then pieced the interviews together in a video, which he shared on YouTube, and with a presentation night for parents.

“I was surprised with the level of interest from the city parents,” Charlie says. “After the showing, lots of people came up to ask questions about the issues the video raised. I tried to give the presentation a sustainability focus and, from the questions, I could see that by addressing an area of mutual concern, I had somehow managed to bridge the gap between city and country.”

The year nine cafe business program is another opportunity all year nines at Caulfield Grammar are offered to explore and develop this focus on real-world experience. Throughout the year, the students rotate through an eight-day course, which gives them experience in running their own cafe.
After studying the practicalities of managing profit and loss, developing and costing a menu, learning about food handling and hygiene, and completing barista training, they create and run their own themed cafe in a permanent facility in the year eight/nine building.

“They divide into 15 groups, which means the cafe runs for about 30 weeks of the year,” Danielle explains.

“The cafe might be themed according to a particular country such as Italy or Mexico, or a seasonal event such as Valentine’s Day, Easter or Christmas. The students achieve a unit of competency in hospitality training, which is recognised around Australia. It’s something they can add to their portfolio if they want to apply for a student or holiday job, or perhaps a stepping stone to a career in the industry. The community project initiative is hugely popular with students and staff and is yet another way of giving Caulfield Grammar students the opportunity to follow their passions and build life skills for success in their broader communities.” 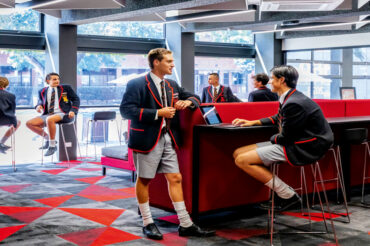 Brothers in Cohort at Xavier College

The pandemic lockdowns revealed hidden reserves of resourcefulness in many communities, including the close-knit boarding cohort at Melbourne’s Xavier College. 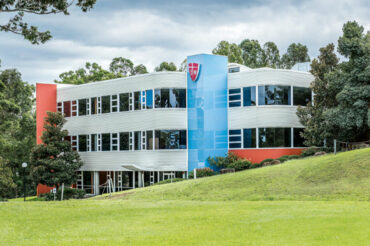 As student Zoe Mavromatis enters her final year of high school, she is well on the way to a distinguished life and career. 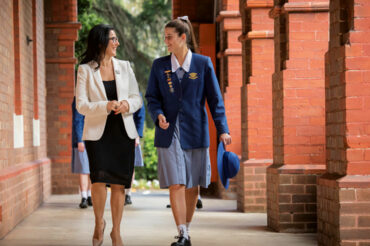 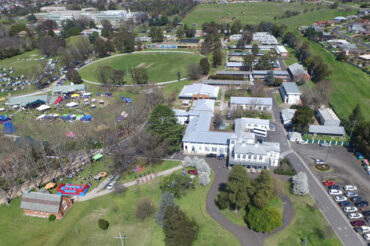 The Scots School and All Saints’ College both have long traditions, but see fresh opportunities in the joining together. 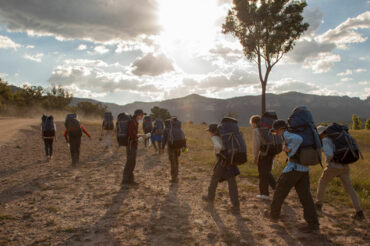 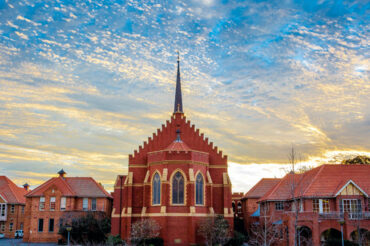 Students at Melbourne’s Scotch College enjoy some bucket-list experiences when they join the pipes and drums band. 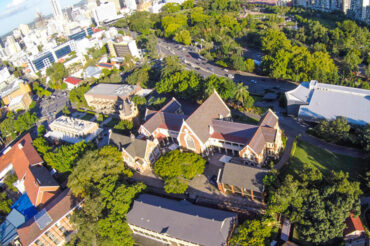 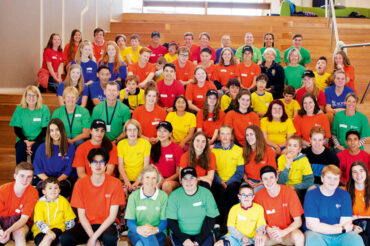 Each year during school holidays, Year elevens from Canberra Grammar School help at a camp for kids with special needs.